An appeal to fund the country’s first dedicated Veterans Orthopaedic Centre has been launched to provide individualised patient care for veterans and serving military personnel.

The Robert Jones and Agnes Hunt Orthopaedic Hospital (RJAH) is aiming to raise £1.5 million to help fund the UK’s first Veterans’ Orthopaedic Centre to treat veteran patients in a setting that is familiar to them and addresses their specific needs. 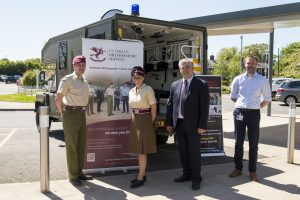 The aim of the Veterans Orthopaedic Centre Appeal is to further expand on the Veterans Service, currently provided at the hospital, by providing a dedicated environment specifically designed for their care.

The new purpose designed Centre will be built to the highest standards and have a more familiar military feel to make our veteran patients more comfortable.

Lt Col Meyer first set up exclusive veterans clinics at the hospital in 2014, and this project will allow him to fulfil and ambition of operating out of a dedicated centre, providing a full range of orthopaedic care to veterans and serving military personnel in a setting that feels familiar to them and addresses their specific needs – physically, mentally and emotionally.

Demand for the service has trebled over the past year – between April 2017 – June 2018, Lt Col Meyer carried out almost 300 operations, and saw more than 2,400 outpatients. 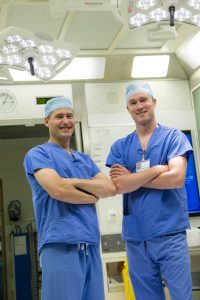 Lt Col Meyer said: “Veterans and service personnel have and do serve our Queen and country. There are very few professions where going to work places you at risk of dying or being severely injured, and I think that level of commitment and service should absolutely be recognised.

“Our veterans deserve the very best standard of care possible, which is why I believe we are the right hospital to be providing this service. We are a leading orthopaedic centre of excellence, with fantastic outcomes, low infection rates and staff who understand the very specific needs of veterans.”

Lt Col Meyer says his ambition is for the UK to become one of the world leaders in veteran care.

The appeal was launched at the House of Commons back in October 2018, where members of Parliament, dignitaries, business leaders and supporters all heard about the plans to build UK’s first Veterans Orthopaedic Centre.

The £1.5 million target will build a veterans’ Outpatients Department comprising of six clinic rooms, which will be part of the hospital’s current Main Outpatient Department. The building will be decorated in a military fashion.

The centre will be specifically designed for veterans’ care, and to cover the whole range of orthopaedic treatment and rehabilitation, connecting to other healthcare services available within the Trust. It will provide a modern, state-of-the-art facility in line with the Trust’s vision to be the leading centre in orthopaedic care.

Having served as a Medical Officer in both the Gulf War and more recently in Afghanistan, where he was involved in treating local civilians, as well as injured troops, Lt Col Meyer understands his veteran patients’ needs. Lt Col Meyer is well-aware of the potential mental health issues that some veterans will suffer from – and having staff with that understanding is key to the service.

Lt Col Meyer also believes the model of care the service provides is an effective one.

He said: “It makes sense treating veterans in one place. Having veterans together on a ward, if you’ve got a sailor, someone from the Air Force and a soldier altogether, all having their hip or their knee replaced, they all compete with each other to get out of bed first, to get walking, that’s good for them. It’s good healthcare, it’s an efficient use of resources.”

There are many ways to donate to the appeal: