Staffordshire and West Midlands (North Sector) Army Cadet Force deployed a 21 strong expedition to Altea in Spain to take part in mountain biking and rock-climbing activities. The daily diary below was written by the expedition leader, Major Lester.

Cadets arrived at MOD Stafford at a blurry eyed 01:30, after checking documentation, equipment and luggage weights we departed for Manchester airport. For two of our cadets this was a great adventure as they had never travelled abroad before. After the 2 ½ hour flight down to Alicante on the Costa Blanca we collected our baggage and hire buses we departed for Altea and after a little google maps magic, we arrived at our accommodation on the outskirts of Altea.

The afternoon was spent settling in, sorting kit, shopping for food and collecting mountain bikes.

After a short briefing, participants were split into two groups where they would be climbing for half the week and mountain biking for the other half.

Sunday. Following a good night’s sleep and a hearty breakfast the groups headed off to start their activities. The climbers headed for the coast at Sierra de Troix which provides a great single pitch teaching venue in a stunning location. We spent the day concentrating on all the basics, movement on rock, belaying, knots and rope management. Although it wasn’t warm, we had no rain and managed a full day of activity which developed the climbing team’s confidence and trust in each other. 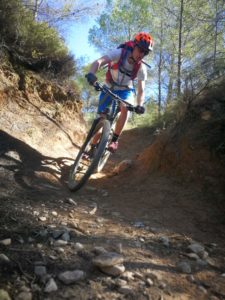 The bikers headed further east along the coast towards La Lluca from there they completed a 47km ride taking in many of the local villages which were linked together by undulating single track trails, woodland and dried up river beds which provided a mobile class room for the development of skills which would prove to be invaluable over the next couple of days. However, the biggest lesson and something that should not be forgotten is that the brakes on European bikes are the opposite way around!

On completion of a very successful first day’s activities it was back to the villa for a quick dip in the pool before preparing evening meal for everyone which was quite a challenge for some of the cadets but after a little guidance and encouragement from the adults, proved to be very tasty, well organised and which only got better as the week went on.

Monday. The climbers headed into Echo valley which has a hidden gem, a single pitch teaching crag called Echo 1.5 which is becoming more popular since its addition to the latest climbing guide for the area. 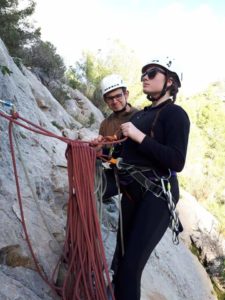 This provided the teams with the opportunity to hewn there climbing skills on slightly harder route before learning the skills required to operate as seconds climbing in series in a multipitch environment. Climbing calls were practiced, gear placement and removal, anchor selection belay building and stance management which would all be put into practice the next day.

This was a big learning curve for the teams, the realisation they would be responsible for each other and that there was no return once they have started their ascent unless an emergency occurred, this would all require bags of self-discipline, courage and determination on their part and a little patience on behalf of the instructors.

The bikers headed inland starting their 32km ride from the reservoir Guadalest and peddled to the sea loosely following the Guadalest River which provided many kilometres of muddy down hill fun and challenges followed by ice cream upon completion of their day which proved to become a theme for the week. The participants were not used to the distances involved but dug deep each day and with lots of determination and support for each other they worked as a team to complete the route each day. 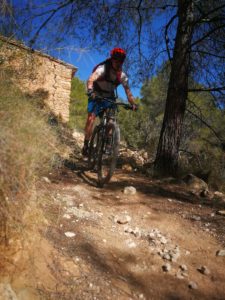 Tuesday. This was the start of a big day for the climbers and there was a nervous tension at breakfast that morning. We headed back to Sierra de Troix as it offers fantastic multipitch climbing in a spectacular location at a suitably challenging grade.

My team made the decision to ascend Oma Suis which is 4 pitches of grade 3/4 with a spectacular grade 5 finish with a multipitch abseil to escape. All the teams were in the same area tackling similar suitable routes.

We geared up and tied in, standing at the bottom of 150m of rock can be a little daunting, but the team stayed calm and started their ascent. After the first few moves, every thing we had practiced the day before fell into place. The teams made quick work of the first couple of pitches but the last pitch of grade 5 proved practically challenging, it is an exposed slab with small holds and 130m of nothingness below, a real mental test and also remembering what goes up must come down which provided the next challenge.

We made ourselves safe, recovered all our gear and rigged ready for a stacked multipitch abseil, one by one from stance to stance we made our way back to terra-firma for a cheese and ham sandwich and to reflect on our achievements. The good news was we had ascended quicker than expected so we had time for another route although a little shorter. The day really tested the team’s commitment, courage and determination but they all exceeded the expectations. 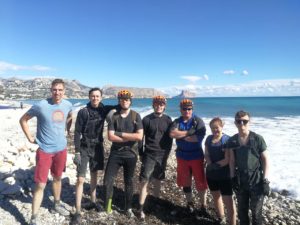 The bikers made a brave decision heading back over to the coast for a final 52 km of downhill bliss. The bike hire company had suggested what turned out to be a fantastic route with kilometres of fast single-track trail with burns, switch backs, drop offs and plenty of mud. The route was ideal for their last day biking as it provided bags of opportunity to practice all the skill that had been taught over the last two days whilst be very physically and mentally demanding but well worth the effort.

Now half way through our exercise and with some very tired people it seemed like a good idea to have a night off from cooking and head into town to one of the many restaurants. After a little discussion we decided up on a Chinese buffet which proved very popular and gave the cadets the opportunity to try a vast array of sea food which they would not normally get. Oysters and squid are definitely off future expedition menus.

Wednesday.  Change around day, after recovering, cleaning and re-issuing kit the previous night we were keen to get an early start as the weather forecast was for rain from lunch time on which is not ideal when climbing especially on limestone.

The bikers plumed for the Guadalast river route which was great for developing skills in readiness for their final ride next day and of course ice cream.

Not wishing to break the mould the climbers headed back into Echo Valley and Echo 1.5. Although these teams had more experience it was going to be a busy day as we had to prepare these teams ready for multi-pitching the next day as this group only had two days. The weather was kind, the rain didn’t materialise and the cadets worked extra hard to ensure we were in good order ready for the big day.

Thursday. Our final day climbing started steadily as we waited for the rock to dry after overnight rain which provided a good excuse to have coffee and cake whilst waiting, we finally headed to Troix east which provides a fine selection of long easy graded routes. We all geared up on the coastal path and wondered up to the climb, flaked out our ropes and started our ascent. Four pitches of grade 3+, 4 make with big belay edges make Espulon Arta a great multipitch introductory route. The team battled their way to the top before staring a mammoth stacked abseil. After spending five hours hanging around in a harness, there was only one thing that could make the day better, ice cream!

The mountain bikers once more headed down the coast towards Lluca for one final day in the pine forests on some formidable single-track trails covering 54km. Their new-found skills and determination carried them all the way back to the hire shop and of course the café next door for more ice cream.

The last supper was a very good BBQ prepared entirely by the cadets and provided a great opportunity for a little reflection and discussion about what people had learnt, both hard and soft skills and of all the feedback given the one comment that I will remember is “I can now go home and cook dinner for my Mum”

Comments from the Cadets following the trip included:

“The best thing I have every done in Cadets”

“The hardest thing I have ever undertaken”

“An amazing experience I will never forget”