A team of 28 cadets and adult volunteers from Staffordshire and West Midlands (North Sector) Army Cadet Force embarked on an expedition to the Otzal Valley in Tirol, Austria, to take part in a variety of Klettersteig (fixed rope climbing routes), alpine mountaineering and mountain biking activities.

As well as introducing the team to new activities, and developing their pre-existing mountain biking skills, the cadets and adults also gained the opportunity to experience the Austrian mountain environment and the culture and history of Tirol.

The cadets arrived at MOD Stafford at a blurry eyed 00:30 on Saturday morning and departed for Birmingham airport.  For four of our cadets this was a great adventure as they had never travelled abroad before.  After the usual hassles of air travel, we settled into our flight down to Innsbruck via Frankfurt.  After collecting our baggage and hire vehicles we departed for the Otztal valley.  With the aid of Google maps and after a mammoth shopping spree around Aldi we arrived at our lodge in the small village of Huben on the banks of the Otztaler river.

The afternoon was then spent settling in, sorting out kit, and familiarising ourselves with the local area and training venues prior to training starting the next morning.

The first surprise for many of the participants was the requirement for them, within their groups, to prepare meals for everyone on a rotational basis.  The cadets, under supervision, prepared menus, shopped for the ingredients and cooked meals according to everyone’s tastes and dietary needs.  Quite a challenge for a group of 14-year-old cadets that do not understand any written or spoken Austrian!

Following a good night’s sleep and a hearty breakfast the groups headed off to start their activities. The groups rotated around the aforementioned activities undertaking two days of each activity. 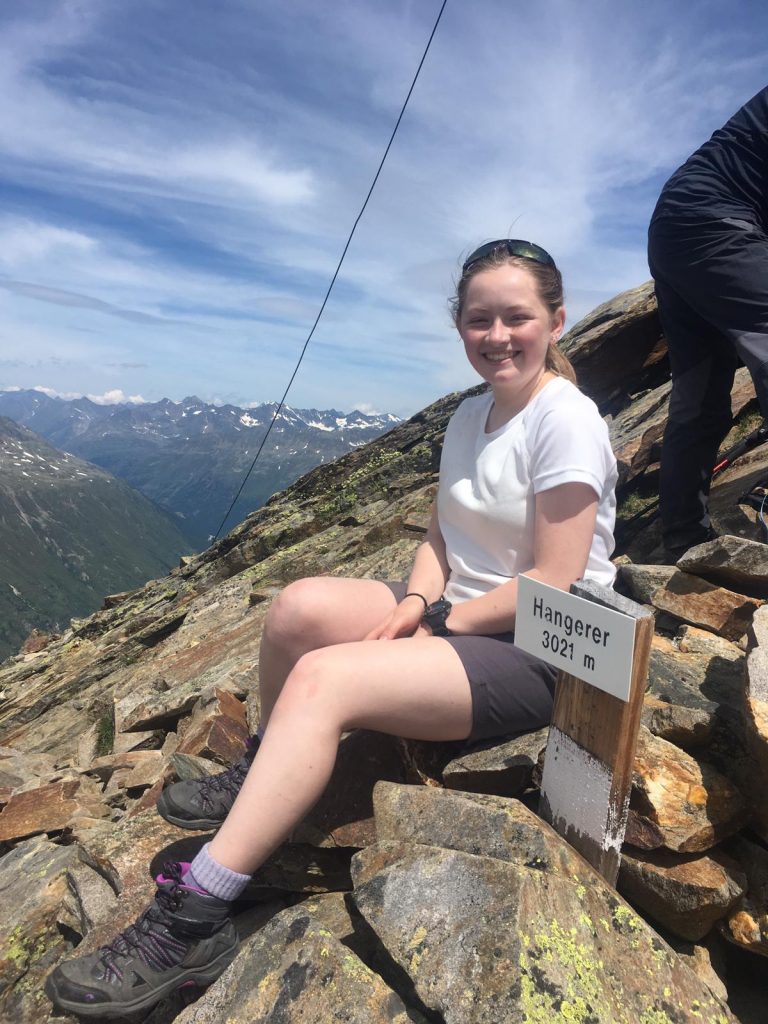 Mountaineering.  The group drive the short distance to Obergurgl with the intent to conduct an acclimatisation walk, the cadets ascended to 2700m in 28 degree heat through the high alpine pastures to the base of the Rotmoosferner glacier before recovering back to the Nederhutte escaping from the sun and for a well-deserved ice cream.

The groups sole aim was to ascend the 3021m Hangerer peak on their second day in the mountains, which would be a first for all participants and would make a great photo finish in the culmination of the mountaineering phase.  The group started off from Obergurgl where they utilised the gondola to gain some height.  From the lift station it was then a eight hour round trip to the summit, in 32 degree heat and bright sunshine. This was a challenging trek for inner city folk!  The greatest phenomenon for the groups were that despite the heat and sun shine there was still copious amounts of snow and ice around.

Klettersteig.  The Klettersteig group headed to the Stuben Wasserfall for their introduction to a truly alpine activity which can trace it origins back to the First World War and a requirement to safely move troops and equipment through the high mountains between Austria and Italy.  After a pulse raising walk in, the route started with a cable bridge before ascending the Wasserfall using the cable and metal staples to assist.

The Grande Finale on the ascent was the completion of a Tyroline above the audible and magnificent falls. The route provided an opportunity for the participants to develop their kletter skills as well as gaining confidence in the equipment and acclimatising to the new environment.  Taking novices on a grade C level Klettersteig enabled the development of our instructors who ensured the safety and management of the group.

Our second Klettersteig was most definitely a step up.  The Lehner Wasserfall graded at a C / D level has its crux at the very beginning, a 30m vertical climb aided by the cable and many staples! This was followed by a spectacular and exposed 300m rising traverse, hanging above the line of the waterfall.  As much as this was a very physically challenging day, due to the exposure it was also an extremely mentally demanding encounter.

The route concluded with a Tyroline across the falls which gave a welcoming shower and provided relief from the heat, followed by a steady descent through the shaded pine forests. 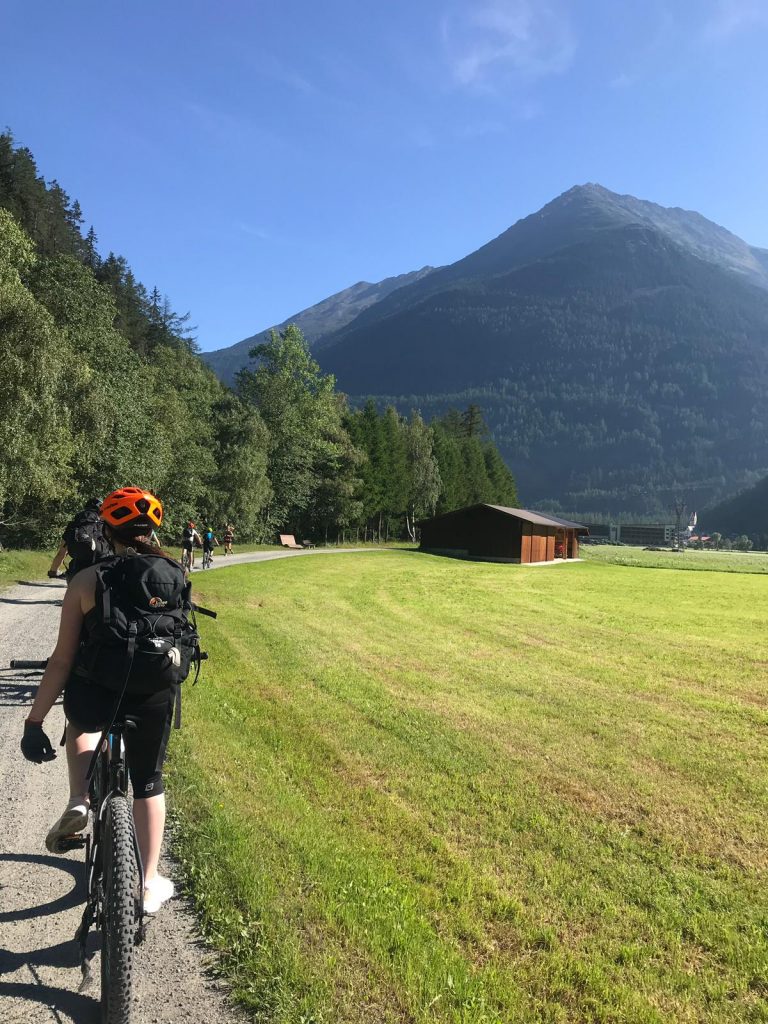 Mountain Biking.  The Mountain bikers drove from Huben to Solden to collect the e-bikes from a shop which was conveniently located next to a pump track providing opportunities for skill acquisition and confirmation before boarding the gondola to reach the top of the mountain.  The group spent the rest of the day riding single track blues and easy red trails perfecting their biking skills, most importantly remembering that the brakes on European bikes are the opposite way around!

After a quick bite to eat and a refreshing coke at the bottom of the mountain, the group then rode the 20km back to Huben where they were most grateful of the battery powered assistance.

Mountain biking from day 1 had left the participants very tired so the decision was made to stay in the base of the valley.  That said 70 km of undulating terrain later having explored the valley from Huben to Oust and back again this once more was not an easy day.

The valley is criss-crossed with cycle routes which allowed them to visit a plethora of villages, learning and immersing themselves in traditional Austrian culture whilst experiencing a new type of biking.

Upon completion of the final day of activities the pressure was on for all personnel to complete the known final challenge…  post-exercise administration and packing in preparation for the journey home.  After a little bit of encouragement from the Sergeant Major, we were all packed and ready for a well-earned dinner.

Having a meal out on the last night provided a great opportunity for the cadets and adults to relax and discuss their adventures and compare experiences.  This naturally led into peer and self-reflection. It was good to hear how much the participants had not only enjoyed the experience but how much they had learned about themselves and their fellow group members.  They found the courage and self-discipline to push themselves further than they believed they could to achieve the challenges laid down by each activity.

By working together within their teams, they identified each other’s strengths and weaknesses and learned to respect each others opinions both during the group administration and activities.

What a fantastic experience and trip for their cadets and staff!

You can find out more about opportunities on offer for adults and youngsters with the Army Cadet Force here.

To find out more about Staffordshire Army Cadet Force, find your local detachment  or learn more about their volunteering opportunities visit their website here.