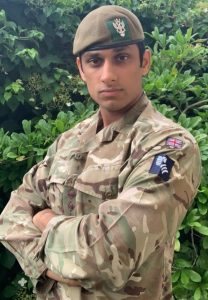 A Reservist Army officer from Birmingham, who is a civilian fire-fighter, has played a leading part in the Army’s role supporting the fight against coronavirus.

Captain Deepe Rawji, 33, was born and brought up in Great Barr. He attended Handsworth Grammar School, including its sixth form, and joined the Army in 2007.

He deployed with The Mercian Regiment to Afghanistan, on Operation Herrick 17 from 2012 to 2013, and served in East Africa in 2014.

Deepe joined the West Midlands Fire Service in 2014 and juggled his fire-fighting role with fulfilling his commitments as an Army reservist officer between his shifts.

In 2019 Deepe was granted time off from the Fire Service to deploy with the Army to the Middle East where he provided military training to coalition partners.

When coronavirus hit in March this year, Deepe, along with many military personnel stationed overseas, was recalled to the UK as Operation Rescript, the name of the military’s support to the cross-government effort to combat Covid-19, began. 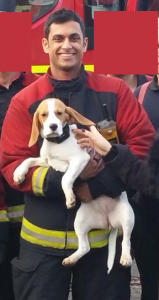 Deepe volunteered to help 4th Battalion The Mercian Regiment who were responsible for managing and delivering Mobile Testing Units (MTUs) in the north west on behalf of the Department of Health and Social Care.

He took on the senior role of second in command of a 144-person sub-unit, based in Halton, Lancashire, which delivered over 17,500 tests to key workers and people with coronavirus symptoms in Cumbria and Lancashire – two of the worst hit areas in the country.

Deepe was responsible for the entire operational output of his unit which included the planning, managing, guidance and delivery of MTUs across the north west region. He managed an operations cell and, on several occasions, stepped up as the Commander in the absence of the Commander. He carried out this role for almost two months working round the clock ensuring operational demands were always met.

“It has been a whirlwind of a year which started working overseas in a demanding environment, to coordinating a complex, fast and furious operation in the UK.

“It is a privilege to be part of the national fight against Covid-19. To be able to plan and conduct actions that will have a real impact on our citizens is what we are here for.

“I must thank the support I have received from my employer for allowing me to mobilise and being a strong supporter for Army Reservists. It will be nice to spend time with Helen, my wife, and family soon.

“Helen has been in the shadows enabling all my successes, whilst working in her highly demanding job. I could not have not done any of this without her understanding and support.”

Deepe has now finished his Covid-19 commitments with the Army in the UK. After spending time with his family, he will return to the Middle East for his third operational tour.