Birmingham Army Reservist nominated for GP of the Year 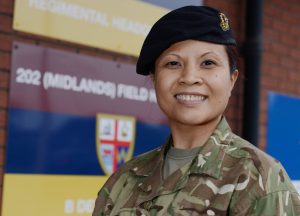 An Army doctor, based at an Army Reserve unit in Birmingham, has been shortlisted for GP of the year.

She lives in Milton Keynes, works as a civilian GP and is Chair of the Milton Keynes General Practice Federation.

The winners of the General Practice Awards, that recognise the efforts of primary care professionals, will be announced at a ceremony at the Park Plaza Hotel in Westminster on 29th November.

Over her 22-year Army career Thao has deployed across the globe, including New Zealand, America, Cyprus, Gibraltar and Germany.

She said: “My work as a Reservist has given me added command and leadership skills in my civilian job. In turn I think I’ve brought a knowledge of wider medical fields in to the Army.”

Thao’s role as unit medical officer involves ensuring the health and wellbeing of soldiers and, when troops are deployed, providing primary and trauma care.

No stranger to the limelight, Thao is an accomplished mezzo soprano singer and amateur dramatics performer, winning the Milton Keynes Inspirational Award for an upcoming female singer in 2018.

Last year she sang in front of 16,000 football fans at the MK Dons Stadium before a match when the club signed the Armed Forces Covenant.

She added: “I turned to music four years ago when I was going through a particularly difficult time in my life. Music helped me to relieve stress, giving an outlet to use that negative energy in a positive way.”

Thao will next be singing on 5th October at the National Memorial Arboretum (NMA) for Ride to the Wall, a motorcycle charity that raises money for the NMA.

She has raised over £3,000 for Milton Keynes charities, The Henry Allen Trust and The Bus Shelter MK, and, last year, was awarded the Milton Keynes Women Leaders Award for Professional Services.

To find out more about the Army Reserve visit our web page here.