Birmingham based Jack, 26, has completed two and half years of training with the Royal Marines Reserves (RMR) to receive the coveted green beret at the end of May 2018.

This achievement was not without its challenges and although m any people try, only a few managed to complete the course. On Jack’s course 32 people started and only 7 went on to complete it. 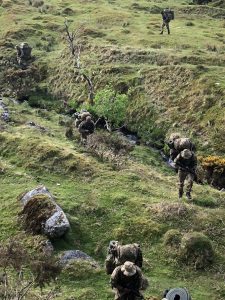 Phase one alpha of training provides the basic knowledge for life in the military including kit preparation and military knowledge. Once this first phase has been passed the recruits can then move onto phase one bravo training which covers training such as conducting reconnaissance, radio communications, amphibious warfare and specialised equipment, required to get the recruits to a position where they would be able to deploy alongside their regular counterparts once they receive their green beret.

Alongside his RMR training Jack completed an Open University degree and worked part time. Since completing his course, he has started a full time job. This has all been aided by his training which gave him the discipline and ability to persevere and keep going even though things are tough.

Jack told us how he felt during training, “the hardest element was the speed marches which were very challenging, both mentally and physically, I would often dream of ways of getting out of them, but I’m glad I didn’t. The training helped prepare me mentally and physically to a stage where I know I can do it, I’m prepared for exercise or deployment.”

Jack, unfortunately, did not pass his first attempt at the final assessment in January 2018 with his course recruits. If anything, this made Jack realise how much he wanted to pass the course and meant he was better prepared, mentally, for his second attempt in May 2018. 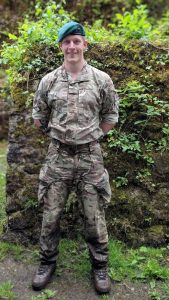 “The highlight of the training, for me, was being able to have utilise the various landing craft used in the Royal Marines as part of our final exercise. One in particular being the Zodiac. It’s a super quiet boat, capable of travelling at high speeds, but allows us to land quietly on a beach ready for an attack, it made the realities of the job much more real to me. I really enjoyed it and couldn’t stop smiling!”

Jack is now looking forward to his career in the RMR and is keen to specialise in Landing Craft. He would also like to help with training new recruits, as this would provide him the opportunity to see them develop and achieve their dream like he has.

If you’re interested in finding out more about the Royal Marines Reserves visit https://www.wmrfca.org/reserve-forces/royal-marines-reserve/