Bugle Breakfast sees pledges made to the Armed Forces

Bugle Breakfast sees pledges made to the Armed Forces 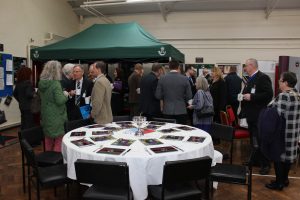 On 12th March 2019 we held a Bugle Breakfast at Hereford Army Reserve Centre, home of 2 Platoon, A Company 6 RIFLES, which welcomed business representatives from across the county.

The event was organised jointly by WM RFCA, Hereford and Worcester Chamber of Commerce and 2 Platoon, A Company 6 RIFLES.

Over 60 guests attended on the day and were taught some of the many different Bugle calls by the Rifles Bugle Major.  Guests were also given an insight into the history of the Bugle Call by Colonel Andy Taylor, The Rifles County Colonel.

The Armed Forces Covenant is a promise by the nation ensuring that those who serve or who have served in the armed forces, and their families, are treated fairly.

Dawn Hardman, Director of HR for Hereford and Worcester Chamber of Commerce commented on their signature: “We were delighted to attend the Bugle breakfast held at Suvla Barracks in Herefordshire and to publicly pledge our commitment to honour the Armed Forces Covenant in support of the Armed Forces Community.

“We have for some time acknowledged the vital role that our Reservists play in committing their time to support the work and activities of our Reservists and our people policies support this.  As part of our future commitment, we also now plan to acknowledge and support those with partners and close relatives who are actively serving and will now be working to ensure that our people policies offer this support. 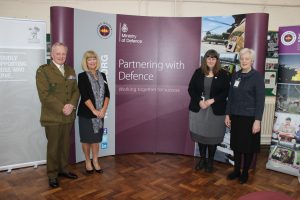 “It was an honour to be part of this event and to hear from many other businesses and organisations who also share this commitment and passion.  We look forward to working together in the future.”

“We believe that we have a duty to stand side by side with those that serve our country, and their families, who make many sacrifices on our behalf. We are fortunate enough to have two Reservists working at the College and know first-hand the skill and dedication they bring to their roles.”

Guests enjoyed a buffet breakfast with hot and continental options all prepared by the local RIFLES chefs.

The event concluded with speeches by Lucy Proctor from The Royal National College for the Blind who spoke about the benefits of employing Reservists and the specific skills their Reservists bring to the college. Colonel Richard Maybery, Chief Executive of WM RFCA spoke about the Association and the work that we do. Major Olly Bevan, Officer Commanding of 2 Platoon 6 RIFLES, spoke about their unit and the skills and experiences gained as a Reservist.

If you would like to find out more about the Armed Forces Covenant and how you can support your local Armed Forces please contact Philip Sinclair on wm-reed2@rfca.mod.uk or 0121 274 2226.