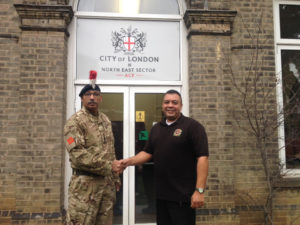 The aim of his journey was to visit 52 mainland HQ’s in just 12 days and collect their ‘flashes’, the patch each cadet wears on their uniform to show which county they are from. Delroy will be framing the collected flashes, showing the diversity of the Army cadets nationally, and some of these will be available at auction with proceeds going to the supported charities. He successfully accomplished hi challenge and visited the 52nd HQ on 7th December 2018.

During his challenge Delroy was collected sponsorship money to raise funds for four charities that are close to his heart: 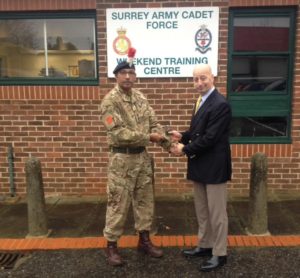 Delroy was also raising awareness of an upcoming ACF trip to South Africa in 2019 for 32 cadets and 10 Cadet Force Adult Volunteers. Barnardo’s Children’s Charity and also The Warwick Museum, the museum of the fusiliers, and the Citizens Trust, a charity that helps disadvantaged cadets in Warwickshire and The West Midlands.

His reasons for choosing the charities listed are all very personal. Delroy spent the first 12 years of his life in community care, a time when he experienced bullying, racism, loneliness and physical abuse; something no child should ever have to go through.

Delroy said: “I have experienced personal poverty which meant no school trips or extra activities as a young child growing up in community care and already facing adversity.” He believes that organisations like Barnardo’s do incredible work in the community that can change the lives of disadvantaged young people for the better.  He added: “I was however one of the lucky ones, and was adopted at age 12 and went on to join the regular army in 1984. My heart and mind always reflects on the soldiers who have lost their lives at home and away from their families.”

These reasons bring us to the South Africa trip, where the cadets will have the opportunity to visit the orphanage, designing and painting the bare walls inside and out with cartoon characters, tidying the outside areas making it safe and putting together playground equipment purchased locally – under supervision. 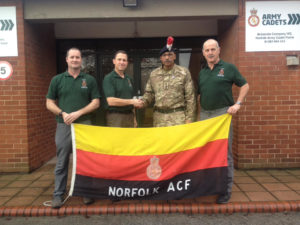 The cadets will be self-funding their places on the trip through independent fundraising.  Delroy said:” It is a real privilege to work with such fantastic people as the cadets and other Instructors in our team.  The cadets are an example of just how incredible young people can be when given the right support and opportunities.”

It’s not too late to donate please visit https://www.gofundme.com/warksacfsouthafrica19 for more information, or view the photos of Delroy’s challenge on Facebook at https://www.facebook.com/WarksACFSouthAfrica19/