The organisation is keen to support the military and added some of their own pledges to the Covenant to:

The Armed Forces Covenant is a pledge from businesses and organisations to acknowledge and understand that those who serve or who saved in the Armed Forces, and their families, should be treated with fairness and respect in the communities, economy and society they serve with their lives. 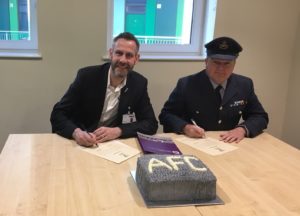 The Covenant was signed at the YMCA’s facility in Erdington, Birmingham by both Alan Fraser, Chief Executive Officer for YMCA Birmingham and Wing Commander Paul Bell, Officer Commanding for No 605 (County of Warwick) Squadron Royal Auxiliary Air Force.

Alan Fraser remarked on the event: “Historically, we know that ex-forces personnel have been over-represented amongst the homeless, but also under-represented in our workforce and on our various programmes. YMCA Birmingham wanted to help address those two anomalies and saw the Covenant as the ideal way to do so. But what we’ve also learnt through this process, is that the armed forces have lots of opportunities and learning to offer, not just YMCA Birmingham, but also the young people who come to us for support.”

Wing Commander Paul Bell commented: “It was a real pleasure to meet Mr Alan Fraser and the team from the YMCA; they have an excellent facility in Erdington and are doing really good work in supporting young people to discover their full potential.  I was also delighted that they have signed the Armed Forces Covenant; this clearly shows their commitment to the Armed Forces’ community, and our shared values in seeking to support and develop individuals to achieve the best of their abilities.”

If you would like to find out more about the Armed Forces Covenant you can contact our Employer Engagement Team on wm-eeao@rfca.mod.uk or 0121 274 2227.