Birmingham-based Cleone Foods Ltd became one of the latest food businesses to demonstrate their commitment to supporting the Armed Forces community at a special breakfast event hosted by the Army in the West Midlands.

Their support was cemented by the signing of the Armed Forces Covenant which was co-signed by Mr Wade Lyn CBE, Managing Director of Cleone Foods Ltd, alongside Colonel Richard Green, Deputy Commander of 11th Signal & West Midlands Brigade.

Cleone Foods most notably produces the Island Delight brand of Jamaican patties as well as a selection of other Jamaican delicacies.  Mr Lyn is also the Honorary Consul for Jamaica in Birmingham. 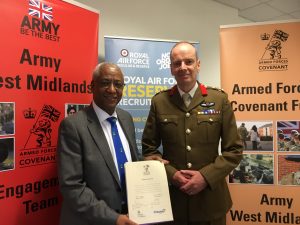 Mr Lyn commented “We are delighted to be part of the Armed Forces Covenant that recognises the value of capitalising on the talents of those that have served our nation. Our organisation will continue to work in partnership with the Ministry of Defence to forge links with our African and Caribbean communities, and raise awareness of the benefits, skills and opportunities that the Armed Forces community can bring to both employers and employees.”

The breakfast event also bought together representatives from different faith and community interest groups, as well as members of the three military services to highlight the work the Armed Forces do within the local community.

Working together they hope to strengthen relationships and collaborate on projects which will benefit the local community and raise awareness of the Armed Forces.

The Armed Forces Covenant is a series of voluntary pledges made by businesses and organisations to enhance their support for the Armed Forces community, which includes serving members of the Armed Forces and their families, veterans, Reservists and the wider cadet forces.  The aim is to ensure that they will be treated with fairness and respect in the communities, economy and society they serve with their lives.

To find out more about the Armed Forces Covenant or how your organisation could benefit from partnering with Defence please visit our website here, or contact our Employer Engagement team on 0121 274 2227.