Steve Bland, the Unit Warrant Officer from HMS FORWARD has hung up his hat after over 30 years in the Royal Navy and Royal Naval Reserve.

After joining  in 1977, a young 17 year old Steve Bland started his training to become a Marine Engineering Artificer at HMS FISGARD. After completing his apprenticeship, he served on a number of ships including HMS ACHILLES, RFA DILIGENCE and HMS DIOMEDE. He also served on HMS BRISTOL during the Falklands War, and it was this service for which he was awarded the South Atlantic Medal in 1982.  He was also awarded the General service Medal in 1988 for his service in the Gulf. 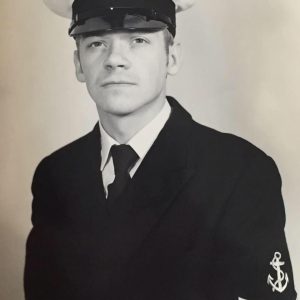 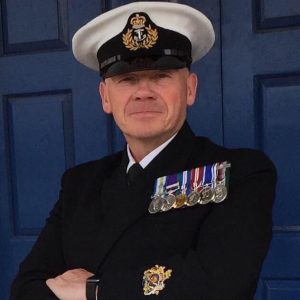 After serving 13 years in the Regular Royal Navy, and at the rank of Charge Chief Petty Officer, Steve decided to leave in search of pastures new, joining the West Midlands Police service where he became a dog handler. 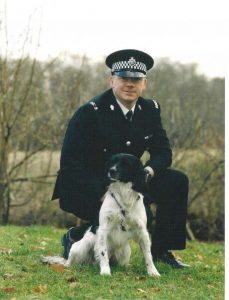 But it wasn’t until 2001 when Steve decided to rekindle his love for the Royal Navy, becoming a Reservist at HMS FORWARD. Starting as a New Entry instructor at the Birmingham-based unit, Steve went on to become the Initial Naval Training (INT) Divisional Officer in 2008, and then the INT Warrant Officer for the Royal Naval Reserve in 2011. In 2014, WO Bland was appointed as Unit Warrant Officer for HMS FORWARD, the role he remained in until his retirement.

Anyone who has crossed paths with WO Bland over the years will testify to one thing; he is committed, enthusiastic, and passionate about the Royal Navy.  Whether it was at a recruitment event, Drill Night or parade, WO Bland would always be there come rain or shine, usually with a smile in tow.

For many of the most recent recruits at HMS FORWARD, WO Bland will be their first memory of the Reserves. Whether it was at a recruitment stand in a shopping centre or one of the monthly Unit open evenings, WO Bland could be found passing on his enthusiasm to the younger generations.

He was recognised as the font of all knowledge at HMS FORWARD; if there’s something that WO Bland didn’t know about the RNR, it’s not worth knowing. And while he was always a stickler for the rules – reinforced by 20 years in the West Midlands Police – WO Bland was always eager to help with whatever problem, query or moan that came his way! 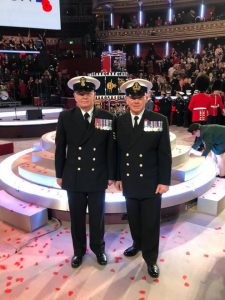 His drive and commitment to HMS FORWARD has not gone unnoticed; as well as the medals awarded during his Regular service, Steve was selected to represent the Royal Naval Reserve at the Royal British Legion’s Festival of Remembrance in the presence of the Queen at the Royal Albert Hall in 2018. 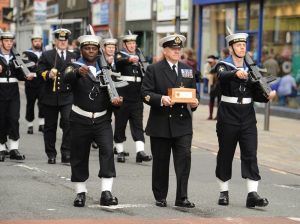 In July 2019 he was presented the Lord Lieutenant’s Certificate at the HMS FORWARD Ceremonial Divisions to recognise his contribution to the Service. In September of the same year he had the privilege of parading the Scroll round the streets of Wolverhampton during the Freedom of the City celebrations, of which he proclaimed to be a real highlight of his career.