Leamington FC Chairman Jim Scott recently signed the Armed Forces Covenant on behalf of the club, pledging to uphold the key principles of the Covenant and support serving personnel and veterans.

The Covenant was signed jointly by Lieutenant Colonel Paul Walkley, Commanding Officer of the 2nd Battalion Royal Irish Regiment, in a ceremony held at the Club’s Phillips 66 Community Stadium in front of local dignitaries, both serving and former military personnel and invited guests. 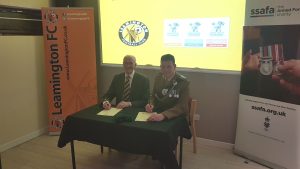 The Armed Forces Covenant is a promise from the nation that those who serve or have served, and their families, are treated fairly.  Those who sign the covenant aim to support the forces through services, policy and projects, thus honouring the commitment and sacrifice of the men and women of the Royal Navy, Army and Royal Air Force.

The Club have committed to a range of initiatives, some of which were previously in place but are now formalised under the Covenant, including seeking to support the employment of veterans, offering flexibility to reservist employees and families of serving personnel, taking part in the Tickets for Troops initiative, offering match admission discounts to serving personnel and supporting services-related charities.

Serving members of the Armed Forces who present their military ID in person at the turnstiles will now receive a 50% discount off the entry price for home league fixtures.

Armed Forces Day and activities around Remembrance Day are also part of the pledge together with a continuation of the already ongoing annual charity football held at the club in support of the Armed Forces Charity SSAFA.

Lieutenant Colonel Paul Walkley commented, “We are delighted that Leamington Football Club have signed the Armed Forces Covenant this week. It is wonderful to see our local football club supporting the Armed Forces and service charities whilst making a commitment to expand that even further.”

“We look forward to developing our partnership and are grateful to the club and their fans for their support.”

Leamington FC Chairman Jim Scott, “It will be great to see service personnel take the opportunity to attend games in their downtime, whilst the other pledges we have made are aimed at providing opportunities and support for all Members of the Armed Forces and their families.

We owe a huge debt to all the men and women who serve and the Club’s commitment to carrying out activities on Armed Forces Day and around Remembrance Day is just a small token of our appreciation for all they do.”

To find out more about the Armed Forces Covenant or how your business or organisation could benefit from supporting the Armed Forces community, please contact our Regional Employer Engagement Director, Debra Barton, on 0121 274 2225 or wm-reed@rfca.mod.uk