Q3 Academy has Cadet Force contingents in all three of its academies in Great Barr, Langley and Tipton.  Formed in 2016, the popularity of their Combined Cadet Force has seen their numbers increase from 30 to 85 cadets, reflecting the enthusiasm of pupils wanting to join.

As CCF Royal Air Force Air Cadets unit, the review was led by Squadron Leader Jim Coupland, from Headquarters RAF Air Cadets, who inspected the cadets before observing their skills in drill, cookery, drone technology and Fieldcraft skills.  A number of promotions were also presented by Squadron Leader Coupland to the cadets as part of the occasion.

Their Combined Cadet Force was formed as part of the Government-led Cadet Expansion Programme to form new cadet units in English state-funded schools.  Following an expansion of the initiative the schools involved are now working to grow their contingents and develop the cadet experience for their students.

42 new units and school partnerships have been created under the programme in the West Midlands, each offering the life-enriching activities of military cadets.  The cadets gain skills in leadership, teamwork and confidence, whilst giving them the opportunity to obtain vocational qualifications and take part in new opportunities.

In the past two years Q3 Academy’s cadets have been flying in light aircraft, undertaken annual camps, visited Cyprus as part of CCF RAF Summer Camps and taken part in exciting activities such as The Bear Grylls Experience.

The majority of these activities have been new life experiences for their cadets, allowing them to forge new friendships and meet other cadets from different backgrounds along the way.

Dr Caroline Badyal, Chief Executive of Q3 Academies Trust commented: “The CCF is a life changing experience for our students. Operating across three Academies, our cadets have already achieved things they may not have imagined they could – some students have gone flying, others have taken leadership courses or participated in overseas camps. The CCF has fostered tremendous teamwork and provided our students with a great sense of responsibility. Their involvement with the scheme is supporting them to be successful while also developing the resilience they need to face the challenges of life after school.”

As well as the dedication and support provided by the Q3 Academy staff and instructors who are part of its Combined Cadet Force, the academy is also working to support wider members of the Armed Forces community.

The academy currently employs a number of veterans and Reservists throughout its three locations, and also actively promotes and supports the CCF.  Q3 Academy recently cemented their ongoing commitment by signing the Armed Forces Covenant; a voluntary pledge made by organisations to outline their commitment to helping support members of the Armed Forces community. 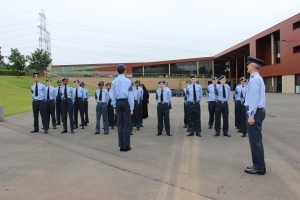 To find out more about what the Combined Cadet Forces involve and volunteering opportunities within them, or how your business can help support the Armed Forces community, visit our website www.wmrfca.org or call 0121 427 5221.