During Armed Forces week our Association held a Business Breakfast event in partnership with the Black Country Chamber of Commerce to celebrate Reserves Day on the 26th June.

The event was held at the West Bromwich Army Reserve Centre, home to 237 Supply Squadron who are part of 159 Regiment Royal Logistic Corps.  It provided an opportunity for regional businesses to network with other local employers and to learn more about the Reserve Forces, and find out more about how they can partner with Defence to benefit the Armed Forces community. 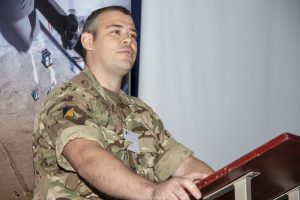 The speakers on the day included Army Reservist Hannah Illingworth, who spoke about her experiences with the Supporting the Unsung Hero Scheme.  The scheme equipped her with the knowledge and starting capacity to create her own business start-up, and is currently run at locations across the UK.  Locally here it is supported by the Black Country Chamber of Commerce.

Lance Corporal Walton from 159 Regiment Royal Logistic Corps also shared his experiences in both the regular and reserve forces, balancing his family life with his military career, and the transferable skills and qualifications he’s gained from the Army Reserve. 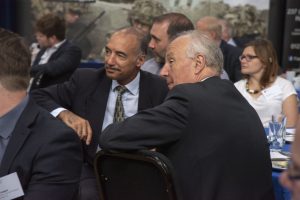 Over 50 guests attended on the day to enjoy a hearty breakfast prepared by 237 Supply Squadron’s unit chefs, including HM Lord Lieutenant of the West Midlands, Mr John Crabtree OBE, and the Deputy Mayor of Sandwell, Suzanne Hartwell.

Prosperity Wealth understand the vital importance of supporting the Armed Forces community and actively support Reservists within their workforce.  One of their current employees, an Independent Financial Advisor, Major Adam Rendall, is also the Officer Commanding of 237 Supply Squadron. 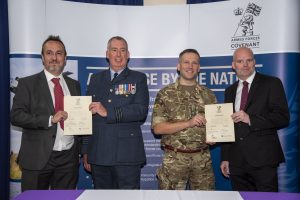 Matt Bell, Chief Executive at Prosperity Wealth commented: “Signing the Armed Forces Covenant, was a natural progression for Prosperity Wealth.  The company was founded by an Army veteran and we currently employ a number of military spouses, Adam is the first veteran/reservist to join in recent times.  Prior to his arrival we were not aware of how we could demonstrate our commitment to the Service community, in such a clear manner.  We have applied for the Bronze Award of the Defence Employer Recognition Scheme, but we have already started to work towards the standards required for the Gold Award”

Major Adam Rendall added: “With only a few weeks of my terminal benefits remaining and the reality of not being part of the Regular Army anymore, I had started to feel an urgency within my quest to securing employment.  I had felt positive in my prospects throughout resettlement, having used my Enhanced Learning Credits, to fund all the required courses and exams.  I was qualified and ready to go, but had not found the ‘right’ opportunity to pursue.  Having completed an internet search of local Independent Financial Advisers, in February 2019, Prosperity Wealth stood out.  Their website and social media, made them appealing as the personality and ethos of the company had similarities to those I had experienced in the Army.”

The Armed Forces Covenant is a series of voluntary pledges made by businesses and organisations to enhance their support for the Armed Forces community, which includes serving members of the Armed Forces and their families, veterans, Reservists and the wider cadet forces.  The aim is to ensure that they will be treated with fairness and respect in the communities, economy and society they serve with their lives.

To find out more about the Armed Forces Covenant or how your organisation could benefit from partnering with Defence please visit our website here, or contact our Employer Engagement team on 0121 274 2227.