A Battery Sergeant Major (BSM) has been recognised by family, friends and colleagues for his above and beyond Service to the Army Reserve and Army Cadet Force. 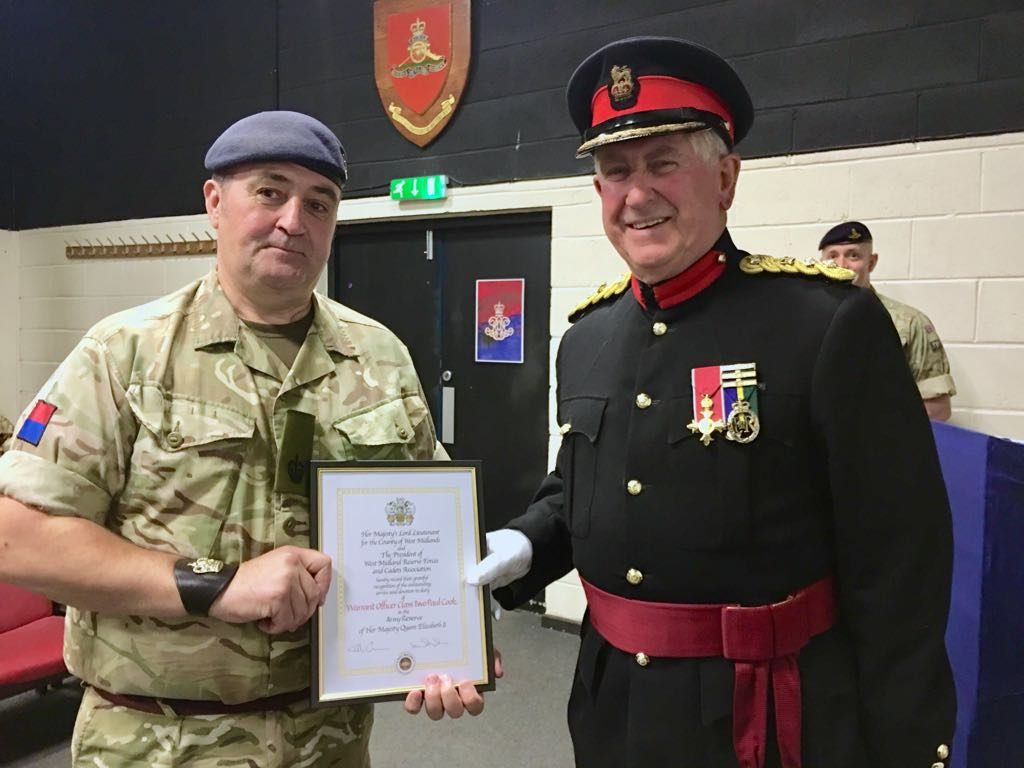 Warrant Officer Second Class (WO2) Paul Cook of 210 (Staffordshire) Battery, 103 Regiment Royal Artillery, has been awarded the Lord Lieutenant’s Certificate in recognition of his exemplary service in the Army Reserve and Army Cadet Force in a surprise presentation attended by friends and family at the Battery located in Wolseley House, Wolverhampton.

Paul was surprised to see his wife, children and grandchildren on the final parade. They had been sneaked past him by colleagues so that they could share in the celebrations as he was honoured by Colonel Tom Lloyd OBE TD DL, Deputy Lord Lieutenant for the West Midlands and Honorary Colonel of 210 (Staffordshire) Battery. His wife was also presented with a bouquet of flowers as a thank you from the Battery.

“I’m incredibly honoured to receive this award but it should really be presented to my wife, children and the rest of my family and friends who have supported me enormously over the years”, said the BSM.

WO2 Cook’s wife said, “We’re all incredibly proud of him. He works very hard and is incredibly dedicated, so it’s lovely to see him being recognised for everything he does”.

The citation for the reward said that, “In all of these challenging appointments he has served with expertise and élan, while ensuring that he develops those around him. Recently, this included his work as part of the planning committee for Armed Forces Day in Wolverhampton, which he undertook before delivering the very successful parade as the Parade Marshall.

Throughout this service he has ensured that he maintains his certificate of efficiency and has deployed to British Army Training Unit Suffield and British Army Training Unit Kenya in support of Regular Army training. However, more recently he has only been required to deliver training to other local units inside the UK, making the most of his experience as a Range Conducting Officer and Service Driving Instructor.

As well as his commitments to the reserves and cadets which mean he is regularly away from home, he has managed to maintain a home life as a husband, father and grandfather.”

When asked about his fondest memory of being in the Reserves, WO2 Cook suggested that “there are too many amazing experiences to choose from, but some of my favourites include, deploying to British Army Training Unit Suffield; working as a Specialist Instructor on the Brigade Training Team; planning and coordinating a battlefield study to Italy where I also got the opportunity to escort the Captain General’s Baton to Istanbul as a part of the Royal Artillery’s 300th birthday celebration; working with our Regular Army paired unit [4th Regiment Royal Artillery] on exercise in Denmark and being part of a ceremony to pay respects to the Dutch Soldiers that paid the ultimate sacrifice in WW2 at their war graves in Wolverhampton.

“I’ve met tonnes of amazing people over the years and have made friends unlike any other. We’ve shared some amazing triumphs and celebrations and stood shoulder to shoulder through some incredible challenges”.