Reservists and Cadets share their stories at evening event

The guests were welcomed with drinks before sitting down for the presentations. The compere for the evening was Michael Collie, of BBC fame, who kept the event running smoothly.  After an introduction by the RFCA’s Chief Executive, Colonel Richard Maybery, the first speaker was Lieutenant Scott from 214 Battery 104 Regiment Royal Artillery. He gave an overview of the Battery and their role. 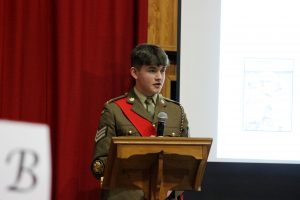 The next two presentations were by Cadets, first up was Cadet Sergeant Grainger, from Hereford & Worcester Army Cadet Force. He spoke about his achievements during hisr time with Cadets including being chosen as one of the lord Lieutenants Cadets for this year.

Cadet Warrant Officer (CWO) Bridges from Phoenix Collegiate Royal Naval CCF was next up with highlights of her achievements as a Cadet and the difference being part of the organisation has made to her. CWO Bridges demonstrated her enthusiasm effortlessly and has achieved a first within her unit by becoming the first Cadet Warrant Officer.

Michael Collie chatted with Stephen Lees, the Armed Forces Programme Manager from Jaguar Land Rover to find out more about their support to the Armed Forces, especially Veterans, and the difference their military skills make to such a large organisation.

Sub Lieutenant Kertrestel spoke about her experiences of being a Reservist and how she balances her military and civilian roles. She also spoke about how supportive her civilian employer is and that they have just received their Silver Employer Recognition Scheme Award.

The presentation element was concluded with two Armed Forces Covenant Signings, the first by St Modwen and the second by Zenith Nurseries.

All in all the event was a highlight of the West Midland RFCA calendar.