On 19th May 2018, Royal Air Force Cosford was granted the Freedom of Birmingham.

The event marked the significant relationship enjoyed between RAF Cosford and the people of Birmingham and took place against the back drop of UK-wide RAF100 celebrations. 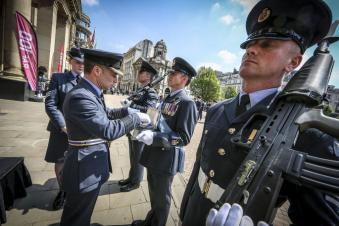 After an inspection by Birmingham’s Lord Mayor’s Deputy, Councillor Mike Leddy, the Royal Air Force personnel exercised their right for the first time to march through the City with ‘drums beating, bands playing, colours flying and bayonets fixed.’

Receiving the Freedom scroll was Station Commander Group Captain Tone Baker who said that it was ‘a great privilege for Royal Air Force Cosford to have the Freedom of Birmingham bestowed upon it; the men and women who have served on the Station since 1938 have always had a close relationship with the City and its people.  During World War II, when the nation faced its greatest crisis, Birmingham and RAF Cosford worked together to provide many of the Spitfires and other aircraft that were needed on the front line in the defence of the United Kingdom.  Our parade today honoured the 80 year relationship and looked forward to many more years of working together. 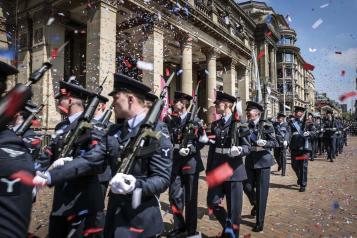 Cosford is the first Royal Air Force station to have the Freedom of Birmingham bestowed upon it.  Leading the parade on the day was Wing Commander Jim Thorley, Officer Commanding No 1 School of Technical Training.  Responsible for the training of all of the Royal Air Force’s aircraft engineers, some of who were on parade with him, he said that it had been ‘a great personal honour to be the Parade Commander at such an important event, especially given it was the Royal Air Force’s centenary year.’

The Royal Air Force Ensign was raised during the ceremony by Senior Aircraftman Josh Mills, originally from Solihull.  He said that he was ‘proud to be from Birmingham and to raise the Ensign in his home city.’