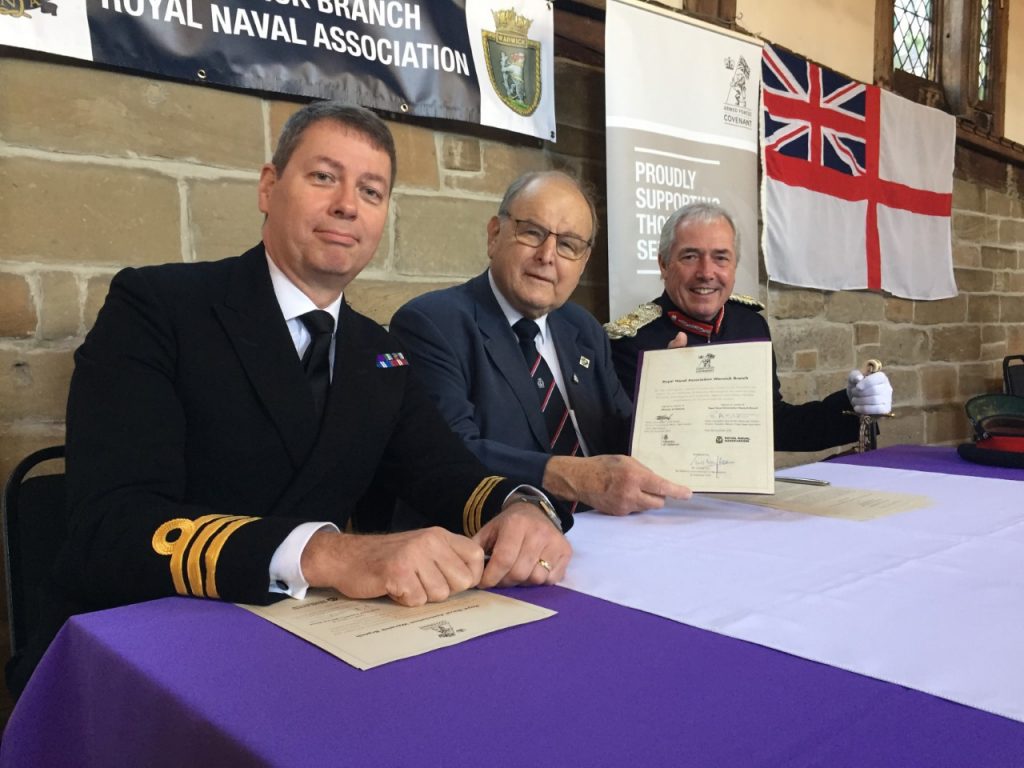 The Royal Navy Association in Warwick has become one of the latest organisations to sign the Armed Forces Covenant – the national pledge to veterans, serving personnel and their families.

By signing the Covenant, the Royal Naval Association (RNA) Warwick promises to uphold the principles of the Armed Forces Covenant which include:

Commander Phil Sparke, Commanding Officer, HMS Forward, Royal Navy said: “It is an immense privilege to sign this Covenant with the Warwick Royal Naval Association on behalf of the MOD. The Armed Forces Covenant means a great deal both to veterans and Reservists, and is a symbol of the nation’s appreciation for its Armed Forces and their work worldwide. An increasing number of the employers of the ship’s company of HMS FORWARD are coming forward to sign the Covenant, demonstrating their support and commitment for our personnel when mobilised on operational duty, as well as acknowledging the transferable skills their staff receive through their reserve engagement. Everyone stands to gain from this process.”

Cllr Lieutenant Commander Bob Stevens Royal Navy (Retired), Chair of the Coventry Solihull, Warwickshire Armed forces Community Covenant joint committee, and President of Warwick RNA said: “The Armed Forces Covenant was developed to ensure that those who serve or who have served in the Armed Forces, and their families, should be treated with fairness and respect in the communities, economy and society they serve with their lives. We are delighted to welcome the Royal Navy Association, Warwick and look forward to working with them in the coming year and beyond.”

More information about the Armed Forces Covenant can be found on our website here.