by J Taylor 20th May 2019
Cadets, Latest News
Snow Camp Venturer Excel is a collaborative expedition between Training Ship Stirling of the Sea Cadet Corps and the charity SnowCamp.  It uses snowsport as a vehicle to promote social mobility and personal development of the most disadvantaged young people in society. 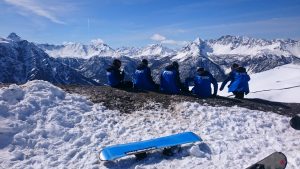 Excel is the final phase of SnowCamp’s programme and takes candidates on a journey from weekly Sunday sessions at the Tamworth Snowdome to a week in the French Alps perfecting their skiing and snowboarding as well as their instructing techniques.  The principle outcome is that the young people qualify as Snowsport England Level 1 instructors at the end of the programme.

Four cadets from TS Stirling started the course in January 2019 and three made it to the week in Montgenevre over Easter.  Throughout the process they were accompanied by two cadet force adult volunteers from the unit.  Leading Cadet Charlotte Statham, who completed the course in 2018, assisted as a volunteer at all the Sunday sessions helping with instructing and acting as a role model for the next cohort.  She has seized all the opportunities open to her through the programme, including work experience in Val Thorens and assisting at the British Alpine Ski Championship in Tignes.  SnowCamp and the Snowdome are paying for her to complete her BASI One ski instructor qualification.  Her SnowCamp courses in 2018 were funded by the Ulysses Trust.

Out of all the young people who went to France one of the cadets was nominated for the most exceptional young person of the week and narrowly missed out in the top award.

Another was awarded the most improved skier/snowboarder of the whole trip by the SnowCamp staff.

This project is having profound impacts on our cadets and adult volunteers.  Cadets who would never have had the opportunity to take part in winter sports have been enabled to qualify as entry level instructors with one of the cadets who took part in year one returning as a volunteer to teach the cadets and other young people who took part in year two. 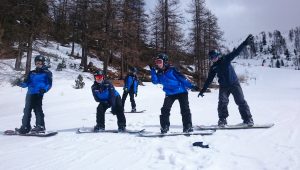 For Cadet First Class Lavinia Cucuic she has been able to use her accumulated Sea Cadet experience at interview to be offered a fully funded place at Solihull School’s sixth form to complete her A Levels.  For a young lady who arrived from Romania three years ago unable to speak English this is a great example of the difference the type of activities funded by the Ulysses Trust can make.

TS Stirling are now planning their own winter sports expedition to impact more cadets whilst using those who have been through the SnowCamp programme to act as assistant instructors.

“Skiing in France was an amazing experience.  It was so beautiful, like looking at a painting”
1st Class Cadet Lavinia Cucuic.