Supportive Employer’s enjoy an evening at the theatre

On Tuesday 21st May 2019 the West Midland RFCA’s Employer Engagement Team hosted a group of Gold and Silver Employer Recognition Scheme (ERS) award holders at the world premiere of Rosie Kay’s production of “10 Soldiers” at the Birmingham Hippodrome. The event kicked off with a reception and drinks before a surprise display by a flash mob of 120 soldiers (who were actors), led by a military drummer from the top of the Hippodrome spiral staircase marching in line down to the basement. Once all in position there was a static hand and motion dance demonstration to the last post, played by a military bugler, a short silence followed by a call of reveille before marching into the basement to a rapturous applause. This set a nice tone for the main event.

10 Soldiers is an inspirational dance production by Rosie Kay that is a prequel to her 2010 production of “5 Soldiers” where she demonstrated and displayed the lives of injured soldiers returning from wars in Iraq and Afghanistan and dealing with their physical and mental injuries. After successfully touring “5 Soldiers” for international audiences for seven years and coinciding with the drawdown of British Forces from the Middle East Rosie embarked on further research with 4th Battalion, The Rifles and the Defence Medical Rehabilitation Centre and the result was “10 Soldiers”.

The show was split into two acts with the first one concentrating on the eight civilians, male and female, put through their basic training paces by two Non-Commissioned Officers and the 30 minute act showed all aspects of the rigours of basic military training that turned them into paragons of military virtue, ready to deploy and defend their country. The second half of the show exposes a very different, and much more human aspect to all ten soldiers and we see the interaction between leaders and soldiers, males and females during periods of rest, training, waiting, socialising, drinking, carousing, harassing, regretting, bonding and connecting with each other.  The “10 Soldiers” are then deployed overseas and dropped into enemy territory where they patrol, their enemy unseen until they come under attack and contacted by an improvised explosive device. We see their grief, pain, and they all have to call on the guts and determination that seen them through their basic training to get them through. They return to the UK where they have to return to work and some have to fight to find a new identity and overcome physical and mental problems to integrate back into life. 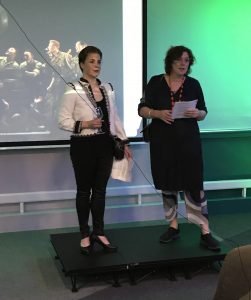 This was a powerful dance production conducted by 10 truly outstanding dancers where the focus was on one aspect – the mind and body of 10 people in the British Army with a focus on post-traumatic stress disorder and the loss of limbs. It shied away from nothing. In the audience were some serving soldiers from 11 Signals and West Midlands Brigade and many forces veterans. It did not trivialise the subject of mental or physical injuries and this was apparent during the question and answer session after the show.

The Q&A panel were made up of Rosie Kay herself alongside Lt Gen Tyrone Urch and Col Dame Kelly Holmes from the military, Captain Harry Parker, an injured veteran and two dancers from the cast. Rosie gave an eloquent synopsis on how “10 Soldiers” was born and what it meant to her and Harry Parker gave a detailed response to a question posed about living with his physical disability and how it has affected his life. Both General Tyrone Urch and Dame Kelly Holmes answered question relating to why the British Army were supporting the Arts and the relevance to the Army. Our Gold and Silver ERS award holders thoroughly enjoyed the evening and for the Employer Engagement Team it was an excellent way to show our appreciation to our senior ERS award holders as part of the Menu of Benefits that the award holds.