Seventeen cadets from the Birmingham region took part in a multi-unit expedition to the United States for the Junior Cadet Leadership Challenge (JCLC).

Twelve of the cadets hailed from TS Stirling Sea Cadets, of which six of these came from the Forward Division based at Tile Cross Academy.  They were also joined by five cadets from the Solihull School Combined Cadet Force through the Department for Education’s programme ‘Schools Together’; promoting links between the state and independent school sectors.

The cadets were also joined by two cadets from the Defence Sixth Form College at Welbeck, and two Officer Cadets from Taurus Squadron of the Defence Technical Undergraduate Scheme.

Read more about the trip in their fascinating account below:

Having arrived late afternoon on Friday 14th June the cadets had to be up early and dressed in uniform the next day to meet up with cadets from the Massachusetts Bay Division of the US Navy Sea Cadet Corps. 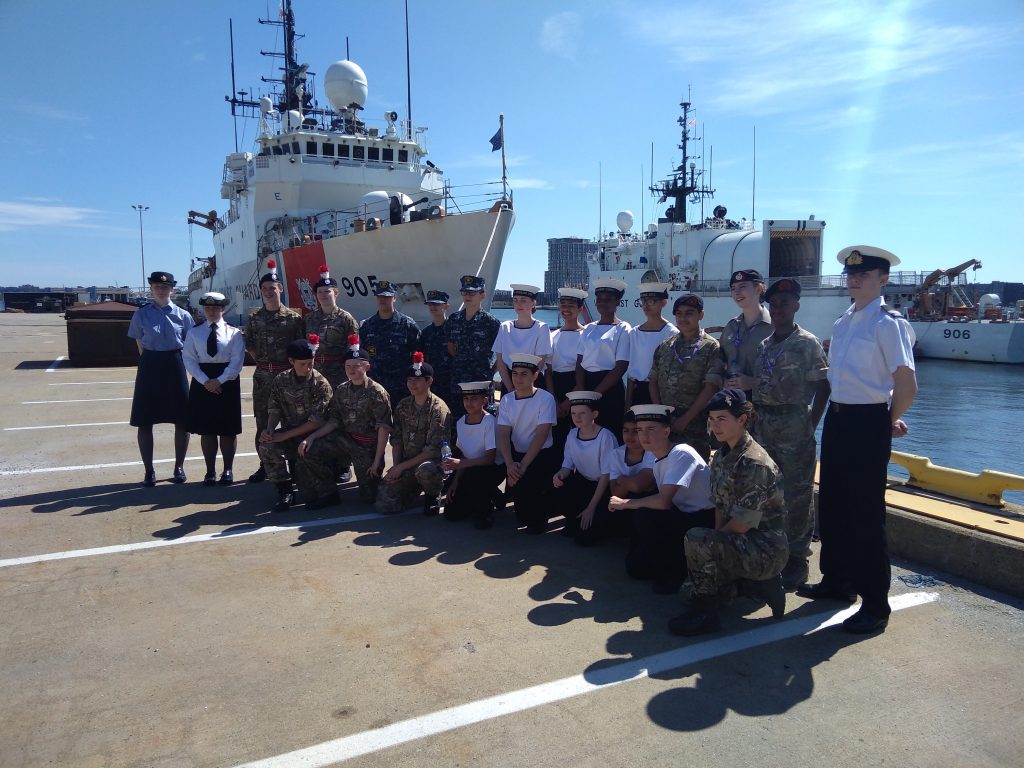 Despite the early hour and having to navigate the strange breakfast menu at Dunkin Doughnuts all cadets were ready on time for the walk from Charlestown to the US Coast Guard Station.  This is where the US Navy Sea Cadets are based and we were shown their facilities and the three cutters that were alongside that day.

The combined party also took the opportunity to pay their respects to the members of the US Armed Forces who fought 75 years ago on D Day.  This was done by laying a Royal British Legion D Day 75 wreath at the base of the station mast, followed by a moment’s silence.

From there we walked back to Boston State Police Maritime Unit. Here we were given a guided tour of the station and its wide variety of high performance patrol craft.  Following this we then retraced our steps to Charlestown Navy Yard where we toured the USS Constitution, the oldest commissioned warship still afloat.  In the afternoon the group took the ferry across the harbour to explore Quincey Market.

Sunday 16th June was the annual Bunker Hill Day Parade through Charlestown.  This commemorates the first major battle of the Revolutionary war and, although a British victory, it was so hard won that the colonial forces considered it a turning point in the war. 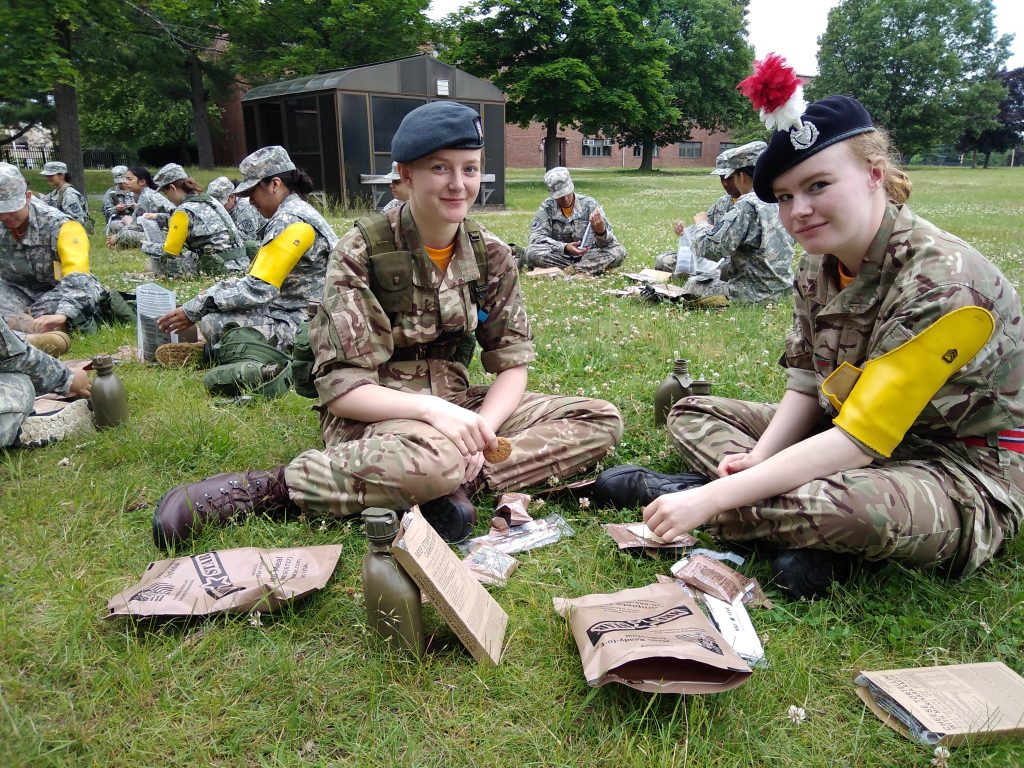 The parade is part carnival and part Lord Mayor’s Show in flavour.  Numerous contingents, floats, bands and ‘characters’ participate.  This year included Boston Police officers dressed as Darth Vader, Alice in Wonderland and assorted other characters.  The march took two hours to complete and the streets were lined with 250 000 spectators!  The American Legion is celebrating their 100 anniversary and the local branch invited us back to their hall for lunch.

The cadets spent the afternoon spending any remaining pocket money at the Cambridgeside Galleria!

Having become very familiar with their new home at the Constitution Inn at Charlestown the cadets were apprehensive about their move, early on Monday morning, to Fort Devens US Army Reserve Training Centre.

These nerves were offset by the anticipation of travelling there on a yellow American school bus provided by East Boston High School!  The school parties from across New England were all arriving at the same time and cadets began to draw their bedding and find out who they were sharing rooms with and which company and platoon they were being assigned to.  For all cadets it was a disorientating experience because all 300 cadets are split up and mixed with young people from different schools, states and countries!

Although not physically arduous or challenging from a strictly adventurous training point view the camp is a really significant test for our cadets.  Indeed on Monday night, even before activities started, three were in tears.

A ‘standard’ unit adventurous training expedition will involve cadets undertaking challenges with their friends and peers so there is a feeling of togetherness and familiarity with the people if not the activity.

Our cadets arrival at JCLC separated them from all their friends and the sense of disorientation generated a lot of self-confidence issues and home sickness.  Simply being put in a room with eight people you don’t know is daunting for a 14 year old away from home for the first time.

Institutional knowledge of dealing with this annual issue from not just the UK cadets but also some of the US cadets means that the cadets are left to work it out and no room changes are granted.  The directing staff know that by the end of the week they will all be best friends, and this is one of the greatest personal development journeys made by the young people.

Tuesday morning started dry but overcast and the three companies began the three day training cycle.  This consisted of:

The staff ride took place in the Minute Man National Park and focused on the events that occurred in the first confrontation in the revolutionary war, including the Battle Road.

Starting with a ceremonial flag raising of the Stars and Stripes the cadets then watch the excellent audio visual presentation at the visitors centre before visiting some of the sites along the Battle Road where British soldiers died and are buried.

Our hosts had provided wreaths and the correct Union flags of the period.  A bugle with a sound cartridge was provided to play the Last Posts.  British cadets had the honour of laying the wreaths at each grave we visited.  Each company also heard from reenactors dressed as a Minute Man and an officer of the 10th Regiment of Foot.  The staff ride finished at the Old North Bridge in Concord where the cadets marched to the bridge behind a colour party carrying the Stars and Stripes and the Union flag.  Three British Soldiers are buried at the bridge and a final wreath laying ceremony took place, in front of numerous tourists. 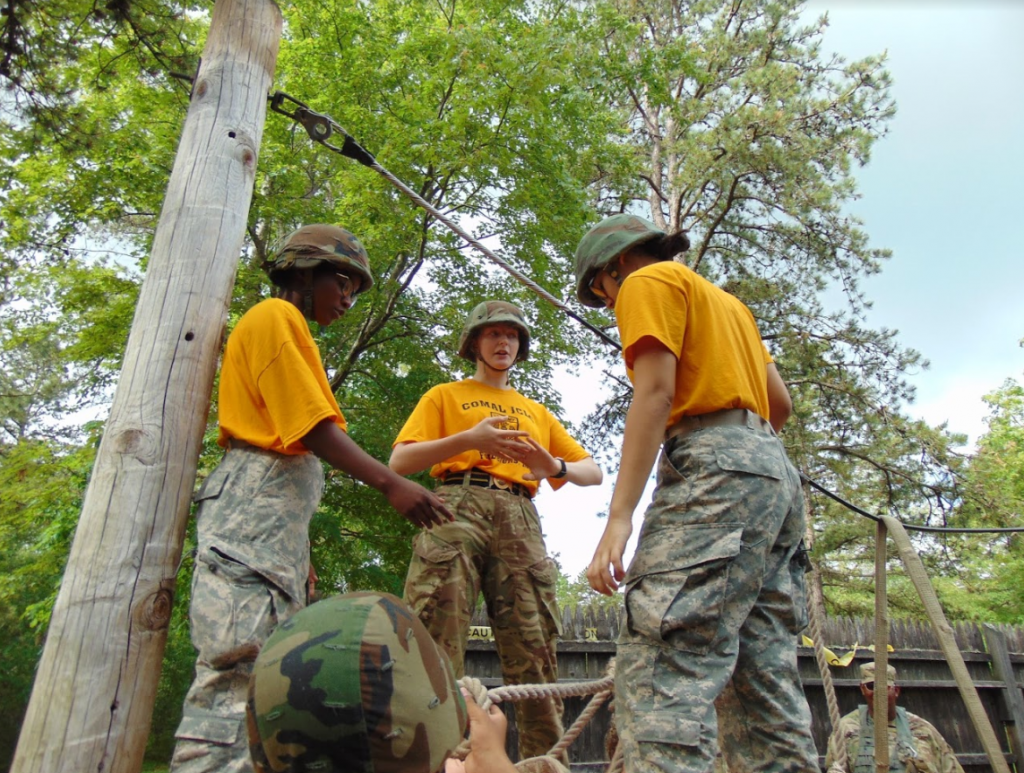 Over the course of the three days that the companies rotate through this package and build up their company identities and esprit du corps through various chants and ‘cadences’ that are sung on the march, on parade, and in competition against the other companies.

Each company also has its own coloured guidons that match the company T shirts issued to each cadet.  It is an extremely effective way of bringing the disparate cadets together and building friendships.

Sadly weather conditions were not perfect and the helicopters could only fly on Wednesday.  Nevertheless half the cadets and 20 adults were able to get a five minute flight above the training area: an amazing experience for all concerned.

On Thursday a wet weather plan was executed which replaced the abseiling and command tasks with indoor map reading, knot tying, and the US equivalent of a Dismounted Close Combat Trainer.

A final ‘formation’ was held on the Thursday night during which the UK contingent marched on the TS Stirling’s Standard with a representative group of cadets who made presentations of plaques to the camp commander. The rest of the evening was spent on signing shirts and tearful farewells.

For all cadets of whatever nationality the camp is a challenge.  All the cadets were well outside their comfort zone with the activities and the camp environment.  The heat, long days, and strange food meant that the camp medics were kept busy both with genuine injuries but also a significant number of attention seekers!

This exercise was a life changing opportunity for all the UK cadets.  Some had never flown before and the personal development journey that they went on will help them to have more successful lives as adults.

Those that were in tears on Monday were some of the saddest to leave on Friday.  These cadets probably gained the most and made the greatest journey from their experience.  They had to overcome their shyness and develop the confidence to deal with unfamiliar people and situations.

In addition to the younger cadets, the Welbeck cadets had a chance to work with officer cadets from Taurus Squadron who were in their shoes only three years ago and have learnt more about the next stage in their service careers.

The Taurus cadets were alsoable to work alongside Officer Cadets from American universities assisting in the leadership of each company, including assessing cadets in leadership appointments against the criteria used in the US University Officer Training Corps system.

Throughout the whole trip the two Officer Cadets were also expected to take a leadership role within the UK party, providing a valuable leadership development opportunity.  It was extremely encouraging that both of them completely understood the concept of Serve to Lead and were excellent ambassadors for the UK and Taurus Squadron.  The presence of cadets from Solihull School CCF also cemented the new partnership between their school and Tile Cross Academy.

For our American hosts the UK contingent is an extremely welcome addition to their camp and adds greatly to the experience of their cadets.  They could not be more welcoming and we are extremely grateful for the assistance provided by East Boston High School in arranging our local transport in Boston and to and from Fort Devens.