A volunteer with the Army Cadets in Worcester is hoping to raise awareness of volunteering opportunities with the cadet forces during Armed Forces Week.

His current role as Company Quarter Master Sergeant with B Company based at the Midland Road Cadet Centre in Worcester.  In this role Dan is required to ensure that all logistical requirements are met to ensure the success of all the Company cadet training.  This role also involves leading and assisting the cadets in their learning, helping them to achieve their best. 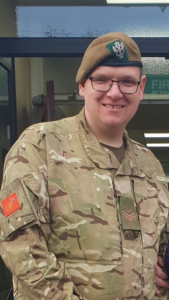 Explaining his reasons for joining he said: “I joined in January 2014 by chance following a conversation with the then Detachment Commander at a local Remembrance Sunday parade.  They were looking for Cadet Force Adult Volunteers and I had memories of being cadet myself and the difference it made to my life.  I thought I would like to get back and help young people find their path and discover what they are capable of achieving.

“The friendships you make with other volunteers is great, and you get to see cadets change from shy youngsters when they join to becoming confident young adults.”

Daniel has also had the opportunity to gain his own qualifications with the Army Cadet Force.  He completed an Adult Leadership Management Course and has successfully undertaken awards in first aid at work, the Bronze National Navigation Scheme and a short range course.

“Becoming a Detachment Commander and completing the Adult Leadership Management Course has definitely helped me in work learning how to manage time and people,” he added.  He also attributes these experiences to increasing his confidence in talking to large groups of people and dealing with new challenges.

The support of Daniel’s employers has been hugely positive on his role in the Army Cadets: “My Manager fully supports everything I do outside of work.  Where I can I try to help them which allows me to not have to worry about missing parade nights or weekends, as I can usually attend most events.”

Daniel will be taking part in the upcoming Reserves Day and Armed Forces Day celebrations, which fall in Armed Forces Week.  He said: “It’s important to show that the Armed Forces are more than just what people see on the news.  It is made up of people from so many different backgrounds.

“I wore my CFAV uniform for a shift in my old store’s reception area for Reserves Day.  It went down well with loads of people asking why I was wearing my uniform and showing an interest in what I do.”

Volunteers can be over the age of 18 to apply to join the Army Cadet Force as an Adult Volunteer. No previous military experience is required as all training is provided.

To find out more about volunteering opportunities with the cadet forces or how your organisation can support employees who are members of the Armed Forces community, please look around our website or call 0121 427 5221.