The West Midlands Combined Authority (WMCA) has become of the latest signatories of the Armed Forces Covenant.

The Mayor of the West Midlands, Andy Street, co-signed the covenant alongside the Commander of 11th Signal and West Midlands Brigade, Brigadier Richard Carter. 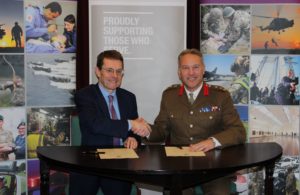 WMRFCA Chairman and Police and Crime Commissioner for Warwickshire Police, Philip Seccombe, was also in attendance to show his support for the signing, along with WMRFCA Chief Executive Colonel (Ret’d) Richard Maybery QGM, and members of the Association’s staff.

The Armed Forces Covenant is a pledge from businesses and organisations to acknowledge and understand that those who serve or who saved in the Armed Forces, and their families, should be treated with fairness and respect in the communities, economy and society they serve with their lives.

WMCA is made up of 18 Local Authorities and four Local Enterprise Partnerships (LEPs).  They work together to move powers from Whitehall to the West Midlands and its locally elected politicians. 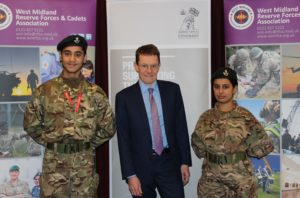 As part of their commitment WMCA have pledged to provide an interview scheme for veterans provided that they meet essential job criteria, and they will also give sympathetic consideration to military spouses for leave requests when their partner or spouse is deployed overseas.

“The signing of the Armed Forces Covenant with The West Midlands Combined Authority is an important milestone towards building meaningful relationships between the Armed Forces and Local Authorities across the Region.

“We particularly look forward to developing programmes to place Service leavers into skills gaps in business and industry, to improving support to veterans and their families, and to engaging with youth across the region to ensure that business and the Armed Forces attract a diverse and skilled workforce for the future.”

To find out more about how your organisation could help support members of the Armed Forces by signing the Armed Forces Covenant contact our Employer Engagement team on 0121 274 2227 or wm-eeao@rfca.mod.uk