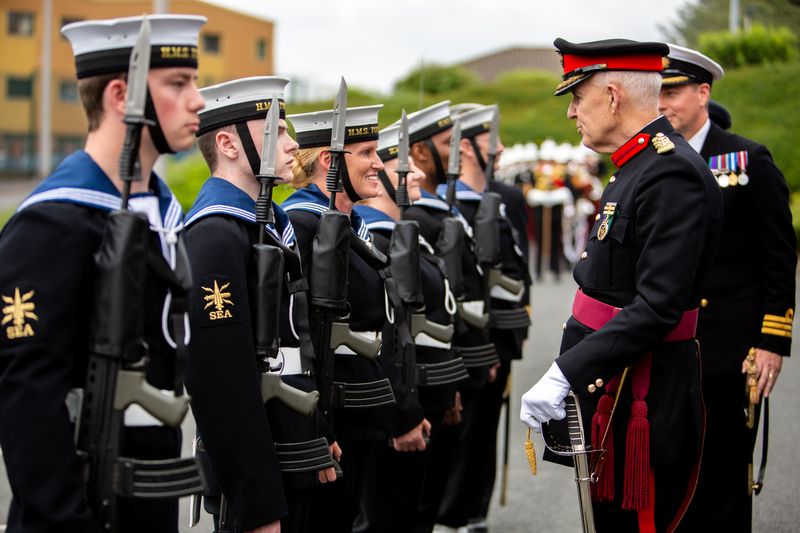 The event, which was organised by members of HMS FORWARD, the Reserve Unit in central Birmingham, was aimed at promoting the Royal Navy’s presence in the land-locked region.

The infamous Royal Marine Band put on a stellar musical display for VIPs from across the West Midlands who attended the event, including Brigadier Graeme Fraser, the Naval Regional Commander and the Deputy Command Maritime Reserve (DCMR), Captain David Teasdale, in one of this first appearances in the role. Also representing the region was the Lord Mayor of Birmingham, and the mayors of Wolverhampton and Solihull.

Unlike traditional Ceremonial Divisions services held by the Royal Navy, this Birmingham-based celebration involved a large contingent of over 100 Sea Cadets from the Mercia and Warwickshire Sea Cadet Corps. 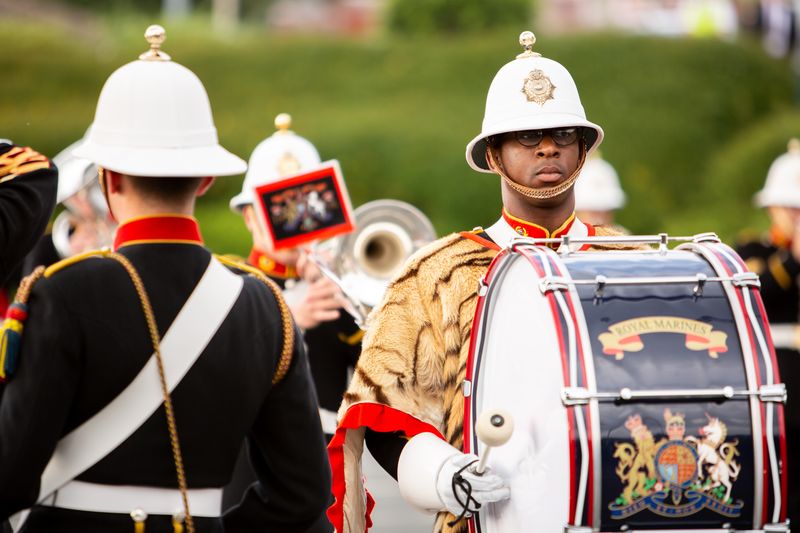 Brigadier Fraser, the most senior representative attending the event, said: “It’s been a privilege to be in Birmingham today as the Naval Regional Commander and to be updated on the significant contribution Royal Navy and Royal Marine Reservists based at HMS Forward make at home and overseas.  HMS Forward sits at the heart of the naval family in the West Midlands and it has been fantastic to see so many Sea Cadets participating in the parade.

“The Royal Navy continues to enjoy outstanding support from the people of the West Midlands and it has been a real pleasure to meet so many guests representing the public that we serve.  This enduring relationship will be further reinforced as HMS Forward gains the tremendous privilege of the Freedom of the City of Wolverhampton this September and as we look forward to the build of the state of the art Type 26 frigate, HMS Birmingham.”

To further strengthen the relationship between the local Royal Navy, Reserves and Sea Cadet Corps in the region, the parade was preceded by a day of activities focused around leadership, first aid and fieldwork skills. The Cadets were even lucky enough to receive a lesson in ceremonial music by the Royal Marine Band!

The Commanding Officer, Commander Philip Sparke, said about the day: “HMS FORWARD is very proud to be hosting Lord Lieutenant’s Ceremonial Divisions in Birmingham.  Service in the Royal Naval Reserve offers our people a wealth of skills, and this event will give us the chance to share them with over a hundred Sea Cadets, along with a number of friends of HMS FORWARD as part of the wider Royal Naval family within the West Midlands“.

To find out more about the Royal Naval Reserve visit our web page here.