Winners delight as they receive their Gold Award

The awards took place at the iconic National Army Museum, and this year the West Midlands eight very proud Employers were amongst a total of 100 that were presented the Gold Award by Chief of the Defence Staff, General Sir Nick Carter KCB CBE DSO.

The Defence Employer Recognition Scheme encourages employers to support defence and inspire others to do the same. The scheme encompasses bronze, silver and gold awards for employer organisations that pledge, demonstrate or advocate support to defence and the Armed Forces community, and align their values with the Armed Forces Covenant. The Gold awards recognise those employers who are an exemplar within their market sector or region, who proactively advocate support to Defence People issues to partner organisations, suppliers and customers with tangible positive results.

West Midland RFCA’s very own Regional Employer Engagement Directors, Bobby Birdi and Phil Sinclair were very privileged and proud to have been part of the event. Hosting the region’s recipients in fine style, ensuring they were well looked after and took every opportunity to have their photographs taken. The evening went superbly well, with the Band of the Scots guards, the Welsh guards Drums and the Royal Yeomanry Band all providing fine martial entertainment throughout the evening. 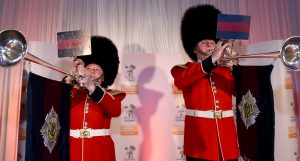