RAF Air Cadets from 29F (Rugby) Squadron reached the finals of the national RAF Engineering Competition.  The competition, which started in 2019 and was delayed due to the COVID-19 pandemic, had over 25 youth entries. 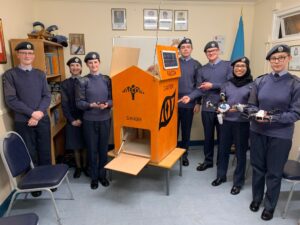 The team’s creative design – Project Falcon – is an automated Bird Strike Prevention System designed to be used on airfields to improve safety and avoid birds colliding with the flight paths of aircraft.  It uses pattern recognition to identify a species of bird from its call, before deploying an appropriate deterrent.  The deterrents include a range of audible warnings and noises, ground based drones and airborne drones to scare the birds away.

29F Squadron have been working tirelessly to take the design from initial concept to prototype and have received positive feedback from commercial and military Air Traffic Controllers. 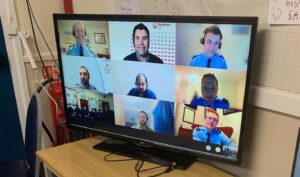 The judging panel, made up of four RAF Air Commodores (including the Commandant of the Air Cadets) and Raytheon Technologies were impressed with the viability of the solution and the teamwork that had been demonstrated in creating it.

The squadron were delighted to reach the final round – ending up in joint third place.

Squadron Commanding Officer, Flight Lieutenant Lee Ison, commented, “The commitment and ingenuity that the 29F team demonstrated in creating Project Falcon and taking it through to the finals of the RAF Engineering Competition has been inspiring!

“To have achieved so much, on top of their other cadet activities and schoolwork, during the COVID pandemic has been incredible and we are all extremely proud of them. They gave a very confident presentation to four 1 star RAF officers and the rest of the panel – well done!  My thanks also goes to Flying Officer Howard Jones who co-ordinated the entry and the other volunteers who assisted.”

The Squadron will now receive several thousand pounds worth of prizes, including the drones that they used for their design and a 3D printer.

You can watch a video about the concept and creation of Project Falcon on the Squadron’s Facebook page.

29F (Rugby) Squadron Air Training Corps are part of the wider Warwickshire and Birmingham Wing Air Cadets.  Based in Rugby they offer young people aged 12-20 years old the opportunity to take part in activities and adventures, whilst developing skills along the way.  There’s also some amazing chances for cadets to get airborne and take part in flying and gliding.  Visit the 29F Squadron website to find out more.

Find out more about Cadet Forces in our region and your nearest unit via our unit locator.