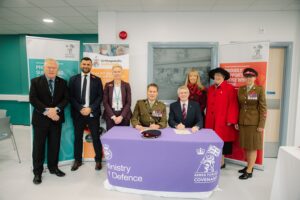 The Orthopaedic Institute at The Robert Jones and Agnes Hunt Orthopaedic Hospital (RJAH) have pledged their support for staff and volunteers who serve in military roles by signing up to the Armed Forces Covenant.

The Covenant, which has also been signed by the Oswestry-based hospital and the League of Friends Charity, represents a pledge of support to people who are serving in, or who have served in the Armed Forces.

This includes supporting the employment of both veterans or their partners and any employees who serve with the Reserve forces by accommodating their training and deployment where possible.

Richard Lumby, Trustee at the Othopaedic Institute signed the Covenant on behalf of the organisation.

He said: “We have thought carefully about what we can do to support the Armed Forces community. Signing the covenant reaffirms a linkage with the veteran’s centre and the Institute.

“Pledging our support by signing the covenant conveys our support for the centre and the work carried out by Lt Col Meyer and his team caring for veterans, reservists and current serving members of the armed forces.”

The Orthopaedic Institute support RJAH by raising funds for research and education.

Representing the Armed Forces was Lieutenant Colonel Carl Meyer, Consultant Orthopaedic Surgeon and Staff Reservist in 202 Field Hospital. He said: “The Orthopaedic Institute have been fantastic supporters of all the work we do here for veterans and military personnel.

“Their support has been essential in driving our new state-of-the-art £6 million dedicated Veterans’ Centre – I cannot thank them enough and whole heartedly commend them for signing this covenant.”

RJAH is also a Gold Award holder of the Ministry of Defence (MoD) Employer Recognition Scheme, which demonstrates how the Trust pledge to support the Armed Forces Community.

Philip Sinclair, Regional Employer Engagement Director for the MoD, said: “I was delighted to be able to support the Orthopaedic Institute signing of the Armed Forces Covenant. The more organisations that sign the Covenant, the more awareness grows and spreads, and the greater the impact and the likelihood of positive outcomes.

“Thank you for your support, the Ministry of Defence is truly grateful.”

Find out more about the Armed Forces Covenant.