West Midland RFCA’s Employer Engagement Team were pleased to be able to invite Armed Forces Covenant signatories from across Shropshire to a showcase event at D Squadron The Royal Yeomanry’s (RY) Army Reserve centre in Telford.  The event provided a platform for D Squadron RY to demonstrate the skills their Reservists gain from their military training, specific roles within the RY include Jackal crew, Adjutant Generals Corps (AGC), Medics and Chefs. The event also gave the opportunity for Armed Forces signatories to meet members of the Armed Forces community which they have pledged to support. 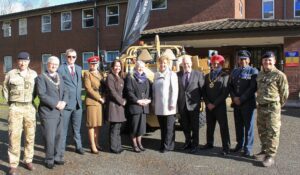 As part of the event time was taken to welcome four new Armed Forces Covenant signatories to such a supportive family. These businesses were:

The Armed Forces Covenant was introduced by the Ministry of Defence in 2014 and is used across the country for businesses to pledge their support to the Armed Forces family. The organisations who hold a Covenant recognise the value serving personnel, both Regular and Reserve, veterans and military families contribute to their business and our country. 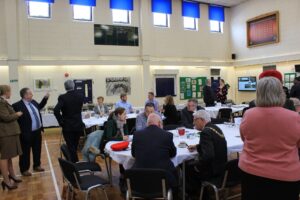 Philip Sinclair, Regional Employer Engagement Director at West Midland RFCA said, “the event was a great opportunity to spend some time with businesses and organisations that have delivered strong support to the Armed Forces community, and who we look forward to supporting as they continue their Armed Forces Covenant journey with the Defence Employer Recognition Scheme.” 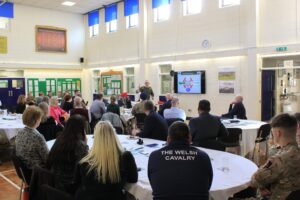 Captain Nick Trevor, Permanent Staff Administrative Officer at D Squadron RY added, “It was an honour for the Squadron to provide the conduit to demonstrate the value of employer engagement in support of the Reserve.  For example, four new business leads signing the Armed Forces Covenant in support of the military family was a truly rewarding experience for all the members of the Squadron who supported the event.  Similarly, to have many representatives of business and community stakeholders who have already signed the Covenant and the high esteem to which they all held the military community was both rewarding and humbling from a unit perspective.

“All that said, these events are always the canvas on to which to paint the individual Reservist and their pride in their roles and service of the Nation.  A shining example of the value of such events was the interaction between Pte Danniella Lessels (AGC) and Amanda Jones, who signed the Armed Forces Covenant on the day, as the CEO of Approved Care and Support.  As a result of their conversations Pte Lessels has the opportunity to bring all the skills she has learnt in the Reserve, within the administration area, to an interview with the business for her first civilian employment. As such, the thanks of all at the unit to Amanda for presenting the opportunity. Danniella would be an asset to any business as she imbues the values and standards, and above all, the drive to succeed ingrained in all Reservists, which makes them such a valuable resource to both employers and the Reserve.”

Find out more about D Squadron The Royal Yeomanry

Find out more about the Armed Forces Covenant and how your organisation can get involved.