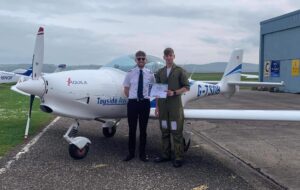 At the start of the year Flight Sergeant (FS) Will Scott of 2028 Southam Squadron set himself a number of goals; one of which was to apply for an Air Cadet Pilot Scheme Scholarship.  After successfully completing the application process which included an interview and assessments, FS Scott was well on his way to his two-week Scholarship at Tayside Aviation in Dundee, Scotland.

In his first week he learnt how to fly the Aquila two-seater trainer, how to handle the aircraft, radio communication and develop his confidence as a pilot.  At the end of the first week FS Scott took his theory test which he literally passed with ‘flying colours’.  Setting his sights on the ultimate goal of flying solo in week two and gaining the coveted silver pilots ‘wings’ – three sorties and one solo flight later, he passed the course.

A few weeks later, it was the turn of Sergeant Louie Burn from 495 (Sutton Coldfield) Squadron ATC to ‘go solo’ in Dundee. After his two-week Air Cadet Pilot Scholarship he has also been awarded the RAFAC Pilot Wings to wear on his uniform. Congratulations to both cadets!

A number of cadets and staff received promotions in recognition of their hard work and successful completion of interviews and courses. Congratulations to: 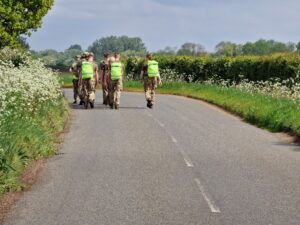 The march consisted of two 20km road marches completed over consecutive days. The team were out in beautiful sunny conditions, with lots of smiles and camaraderie for an enjoyable weekend.

Nine cadets achieved their Bronze road marching badge, with the other eight cadets having previously gained theirs. Each member of the team received their first Bronze WARMA Road Marching medal in recognition of completing a successful weekend.

Flight Sergeant Harry Baker from 495 (Sutton Coldfield) Squadron ATC  is the first cadet in the Wing to complete an additional five solo flights to be awarded the rare Gold ‘Wings.  He achieved his latest wings on the Viking Glider at 644 Volunteer Gliding School. 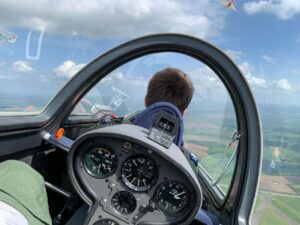 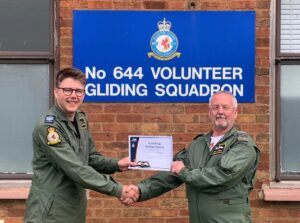 A number of Cadet Force Adult Volunteers from the Wing, as well as Cadet Warrant Officer Barton from 485 (Harborne & Quinton) Squadron ATC were all fortunate to be nominated to attend a Royal Garden Party, in recognition of their service to RAF Air Cadets. 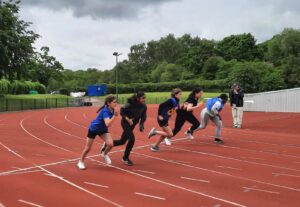 For the first time in over two years, 17 squadrons came together from the Wing to compete against each other at the Wing Athletics meet.

Cadets from 121 (Nuneaton) Squadron ATC attended a parade to support 30th Signal Regiment receive the Freedom of the Borough in Nuneaton.

Three cadets from the Wing joined the RAFAC Drill Display Team at this year’s RAF Cosford Air Show.  After a weekend of training at a selection weekend, Sergeant Gurney and Corporal Burwell, both from 29F (Rugby) Squadron ATC and Sergeant Cop from 487 (Kingstanding & Perry Barr) ATC made the final team, with a fantastic effort.  And it was an impeccable drill performance on the day!

34 Air Cadets from across the Wing attended RAF Cosford to take part in the Wing’s JNCO Development Course.  Learning about leadership styles and drill development, the cadets undertook written and practical assessments and tasks to demonstrate their knowledge.

Final certificates and Bronze Leadership Badges were presented at the end of the course, with five cadets also receiving awards for being selected as ‘Best in Syndicate’.

25 Air Cadets from Warwickshire and Birmingham represented the Wing at the Regional Athletics Competition. Following a successful event, their cadets brought home 18 medals, which was a brilliant achievement.

Over the past few months Air Cadets and staff from the Wing have been completing training sessions ready for the International Four Days Marches in Nijmegen, Netherlands.  Aiming to complete a 100 mile long march over four days, it is the world’s largest multiple day marching event and brings together over 47,000 participants from across the globe.

The RAF Air Cadets welcome young people aged between 12 and 20 years old to join their squadrons.  As well as working through the cadet training syllabus you can take part in sports, canoeing, first aid, leadership, music, camping, gain vocational awards such as the Duke of Edinburgh Award – and one of the highlights for cadets, the chance to get airborne!

Leading the cadets every step of the way are the adult volunteers, who help to run activities and develop and encourage our young people to achieve their best potential.  There’s also a wealth of development opportunities and qualifications on offer to adults.

Find out about joining Warwickshire and Birmingham Wing as a cadet or adult volunteer.

Find out about the Cadet Forces.