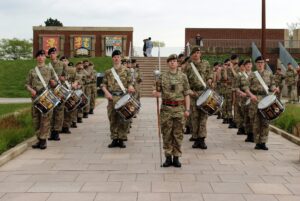 At the end of April the Armed Forces and Cadet Forces in the West Midlands came together to celebrate Her Majesty The Queen’s Platinum Jubilee and military support for the Birmingham 2022 Commonwealth Games.

West Midland Reserve Forces and Cadets Association were pleased to be able to support the evening event at the University of Birmingham, which had a musical and sports theme.

On arrival guests were invited to explore a number of stands hosted by military and cadet units across the region, showing the journey that the UK Armed Forces have undertaken over the 70 years of Her Majesty The Queen’s reign. 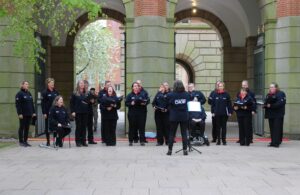 The main events took part within Chancellor’s Court at the University of Birmingham’s grounds and commenced with the first inter-services cadet Field Gun Run competition. Teams from Warwickshire and Birmingham (South sector) Army Cadet Force, Warwickshire and Birmingham Wing Air Cadets and King Edward’s School Combined Cadet Force (CCF) competed to win the trophy, and were accompanied by music from the joint Army Cadet Force Corps of Drums. The fastest team in the competition, and therefore the winners, were the team from King Edward’s School CCF.

To conclude the evening guests were treated to a splendid Beating Retreat performed by The Band of Her Majesty’s Royal Marines, The British Army Band Tidworth and The Band of the RAF Regiment.

“The event is very much part of the Armed Forces’ build up to a fantastic summer of sport.

“The Armed Forces and Cadet Forces across the West Midlands are proud to be supporting the Birmingham Commonwealth Games 2022.”

The Birmingham Commonwealth Games 2022 will be the biggest sporting event to take place in the UK since the Olympics in 2012. The Games organisers have requested military support across three areas: venue security, ceremonial activity, and engagement activity.

View videos from the event in our gallery