Eight exceptional cadets have been appointed to the role of Lord-Lieutenant’s Cadet for the West Midlands region at a special virtual ceremony.

Each year Her Majesty’s Lord-Lieutenant for each county appoints selected cadets to become the Lord- Lieutenants’ Cadets for the forthcoming year.  The cadets come from the Sea Cadet Corps (SCC), Royal Marine Cadets, Army Cadet Force (ACF), RAF Air Cadets and the Combined Cadet Force, alongside other youth organisations such as the Police Cadets, Fire Cadets and St Johns Ambulance.

The appointment is one of the highest honours a cadet can achieve. Their role, as a Lord-Lieutenant’s Cadet, involves assisting the Lord-Lieutenant, as required, at parades and events such as Remembrance Sunday, and at Royal county visits.  Acting as an ambassador for their individual organisations and the young people of their region, it is a high profile opportunity for the cadets to take part in new experiences and meet new people.

Whilst 2020 was a challenging year for us all, the outgoing cadets were keen to share their highlights from being a Lord-Lieutenant’s Cadet last year.

Able Cadet Artingstall from the Sea Cadet Corps said, “I was really lucky this year as I got to participate in two Lord-Lieutenant’s Cadet events.  One being the poem to read out for Remembrance Day and the other being the honour of laying down the wreath as part of the Remembrance Parade and representing the Armed Forces at the London Road cemetery.”

The 75th anniversary of VE Day was a prominent celebration across the UK last year with many virtual events taking place. Cadet Flight Sergeant Davies from Warwickshire & Birmingham Wing RAF Air Cadets said, “During my time as a Lord- Lieutenant’s Cadet I was fortunate enough to complete a virtual event for the 75th anniversary of WW2. I read a memoir about the experience from the viewpoint of a civilian, which was in partnership with Coventry Cathedral as part of their VE Day celebrations.”

As well as looking back on the past year, they also shared some of their best memories as a cadet to date.  Cadet Sergeant Parker from Warwickshire & West Midlands (South Sector) ACF added, “One of my most memorable times as a cadet was back in 2018 as I got to be a part of the drill team.  Luckily we actually won, so it was a great start to cadets, be a part of the team and show everyone what I could do!”

Her Majesty’s Vice Lord-Lieutenant, Professor Helen Higson OBE, thanked the outgoing cadets for their service on behalf of Her Majesty’s Lord-Lieutenant, Mr John Crabtree OBE, commenting, “The outgoing cadets have done us proud in all the work that they have been doing during the last year, even if they haven’t been able to do what they expected to do.  I know you have all been exceptionally smart, reliable and very fine ambassadors for our Cadet Forces, and for your individual units.

“Whatever your chosen path in life is, I have no doubt that your role as a Lord-Lieutenant’s Cadet will look very good on your CVs and you will be more sought after by potential employers.  On behalf of the Lord-Lieutenant I send you all my best wishes for the future and warmest thanks for your dedicated service – I very much hope you enjoyed what you were able to do this year!” 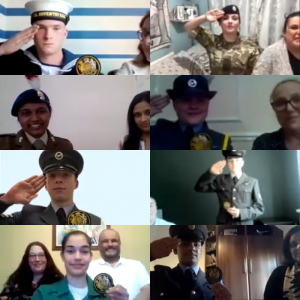 During the second half of the ceremony, the new incoming Lord-Lieutenant’s Cadets were officially invested into their roles for the forthcoming year:

Welcoming the new Lord-Lieutenant’s Cadets into their roles, Professor Higson said, “On behalf of the Lord-Lieutenant I offer you our warmest congratulations on your appointments, which are clearly thoroughly well deserved.

“We have all been impressed by your citations and are looking forward to getting to know you.   I only hope that this virus will allow us to attend some events together in due course.  In the meantime a very warm welcome from me, and thank you for all for rising to this particular challenge – and good luck!” 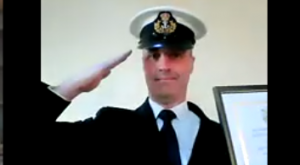 The Lord-Lieutenant Commendation for Meritorious Service Certificate, which recognises exceptional service, was awarded to an Adult Instructor from the Sea Cadet Corps, Warrant Officer 2nd Class Warwick (SCC) RNR, for his dedication and making a difference to the lives of many young people in the Sea Cadets.

Find out more about the Lord-Lieutenant’s Awards and Cadet Investiture ceremonies.