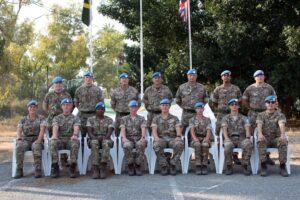 In 2021 159 Regiment Royal Logistics Corps (RLC), a West Midlands based Army Reserve unit, deployed members of the regiment to Cyprus on Operation TOSCA. The Operation is the UK’s contribution to the United Nations Peacekeeping Force in Cyprus (UNFICYP) ensuring peace and stability whilst the political peace process continues.

During Winter 20/21, 32 members of the Regiment and five members of 158 and 150 Regiment RLC temporarily said goodbye to their friends, family and employers as they set off for their pre-deployment training in Dishforth, York. They deployed as a supporting element to 6 Regiment RLC, who were tasked with leading the six-month long operation.

Sergeant Carney describes what pre-deployment was like, “At first it felt very strange that we were training for a hot country in snow and ice, but it was not long before our mind was completely on the role ahead of us.

“We knew it was not going to be an easy mission with the complexities of Coronavirus, however, the pre-deployment training prepared us for what was to come. This confirmed our training was up to the right standard for the usual military activities, but the additional training, such as the Non-Lethal Public Order techniques and how to work with Government and Non-Government Organisations, was really eye opening. We found most of the training easy to adopt with a lot of synergies between our civilian roles and working for the UN.”

As representatives of the UN, the soldiers were immediately issued the iconic blue peacekeeper t-shirts, kindly co-funded by the West Midland RFCA. The t-shirts bared the UNFICYP logo along with the 102 Logistic Brigade ‘Halberd’ on the back – a nod to the combined efforts of multiple elements from the Brigade, both Regular and Reserve, coming together to form the 34th deployed force on Operation Tosca.

The composite platoon strength of Reservists deployed to Cyprus in March and spent the next 7 months employed across the Operations Company and the Mobile Force Reserve. The primary role for the Operations Company, located in the capital Nicosia, was patrolling the central third of the Buffer Zone to maintain the peace between the two opposing forces, the Greek Cypriots and the Turkish Cypriots. Patrolling the Buffer Zone is a 24-hour, 365 day per year responsibility and is shared with the Argentinians to the West of the island and the Slovakians to the East.

Lt Ryan Cartern explains what it was like commanding a platoon within Operations Company, “It quickly became clear that the Army Reservists had a lot more to offer to the operation over and above their defined roles. They have the expected military knowledge; tested and assured against their Regular colleagues, but they also bring unique skills that have been gained from their civilian employment and life experiences. This uniquely supported the operation on the ground with the skills to be able to negotiate, interact and influence everyone around them. I could be confident our Reservists could deploy these alternative skills to be able to make sound decisions on the ground and help maintain the status quo.” 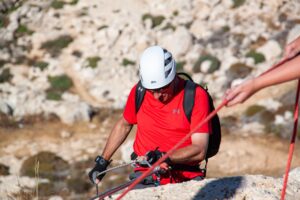 Towards the end of the tour, as restrictions lifted, the Reservists were able to achieve some adventurous training. Rock climbing, kayaking, parachuting, and mountain biking were amongst the activities, and allowed some much-needed rest and recuperation before returning home.

Op TOSCA 34 handed over on 1 October 2021 and returned home to take much needed post tour leave before returning to some truly supportive employers.

Find out more about 159 Regiment RLC.

Find out more about all the Reserve Forces in the West Midlands.