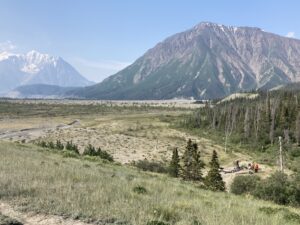 The Yukon – a land of never-ending mountains, endless forests and swarms of mosquitoes.

Early in the summer of 2021 a proposal was put together to take an expedition to the Kluane National Park in the Yukon, Canada. So began almost twelve months of planning with the trip taking place in 2022. Numbers grew to twenty-one with seventeen of these soldiers from 37 Signal Regiment, a Midlands based Army Reserve unit.

The base for the trip was located at Kluane Lake Research Station. The station is situated on the southern shore of Kluane Lake and looks out onto Sheep Mountain on the western side and the Ruby Range running down the East side.

The first day of the trip consisted of briefings and an introduction to bear awareness. Day two say the commencement of the activities with a 16km day trek up Sheep Creek Trail to get a view down the Slims River Valley. The heat and humidity came as a surprise to most of the participants, and with temperatures in the mid-twenties it was certainly a lot hotter than the long-term average for the time of year.

The rest of the trip involved splitting the group up in half, where one group embarked on a five-day canoe exploration of Kluane Lake and the other headed up the Slims River West trail to reach the Kaskawulsh Glacier. Each segment was five days where the groups then swapped over to complete the other exploration. 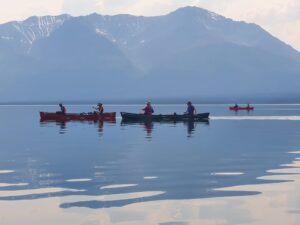 The canoeists first activity was practising their capsize drills, individual (self) rescues and group rescues before setting off along the western shore of Kluane Lake to camp at Cottonwood campground on the first night. Both groups reached Talbot Arm after a couple of days canoeing, before then turning around back to their starting location.

The two groups’ experiences varied slightly, with wind and waves forcing one group back to the eastern shore, before a much more settled couple of days to make their return. 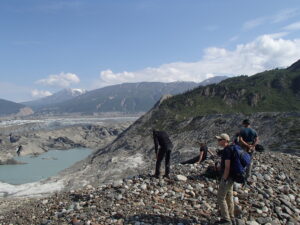 The two trekking trips, were vastly different with the first group starting off with a two-hour detour as Bullion Creek was completely uncrossable. Two nights spent in beautiful surroundings, albeit apart from the mosquitoes, before then traversing the eastern side of the observation mountain which jutted out above Kaskawulsh Glacier. The decent was taken slowly find safe points to cross the water, where it wasn’t too deep or fast.

The second group were immediately met with a route closure due to too many reported bear sightings, so a route up the east side of Slims River was planned. A few nervous moments when one of the soldiers found themselves in quick mud. Once across Vulcan Creek there were several unsuccessful hours spent trying to find their way through the forest, all routes ended up with impenetrable thickets of new growth or piles of fallen trees.

There was nothing else to do but head back to the research station and plan a new route, and so they headed up Sheep Mountain. Frequent rest stops kept everybody together as the ascent for the day was the equivalent of going up Ben Nevis. The views down the Slims River to the ice field around Mount Logan opened up, as did views across to the ice field on Mount Vulcan to the south. Arriving on the peak in the afternoon at an altitude of 1,845m. The last night camping by a lake partially covered in ice and one of the surrounding mountains sounding alive, with frequent rock falls. Waking up at 05:00 saw that the ice had almost covered the lake and there was a thin layer of frozen dew on the rucksacks.

Back at the main camp

Find out more about the Reserve Forces.