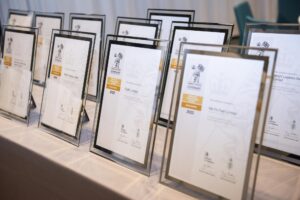 Five businesses from the West Midlands RFCA region have been presented with the prestigious Defence Employer Recognition Scheme (ERS) Gold Award at a special ceremony in Staffordshire.

The joint regional event held on 2nd November at The National Memorial Arboretum saw twenty-three employers from East and West Midland Reserve Forces & Cadets Associations’ regions recognised for the outstanding support they give to the Armed Forces community.

The organisations receiving their award here joined the total of 156 ERS Gold awards being presented in 2022. The five winners for 2022 are:

Shropshire County Council have also had their Gold Awards from 2017 revalidated after their continued support to, and advocacy for, the Armed Forces. 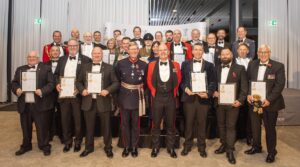 The Chief Executives from both RFCA’s, Colonel (Ret’d) Richard Maybery and Brigadier (Ret’d) Stuart Williams, commented: “We were delighted to be present at the Gold Awards this evening and to see the recipient organisations recognised in this way by Defence. The bar for the Gold Award is a high one – but not unrealistically so, as witnessed by the broad range of organisations represented.  All of them have demonstrated their unswerving commitment in supporting the Armed Forces family – veterans, Reserves, cadets, adult volunteers and military spouses. That support and advocacy is much valued by the Armed Forces and it’s people and it’s great to see it rewarded. We look forward to continuing to work with all our winners and to continue, with them, in bringing other organisations along too.”

To win a Gold Award, organisations must provide ten extra paid days leave for Reservists and have supportive HR policies in place for veterans, Reserves, and Cadet Force Adult Volunteers, as well as spouses and partners of those serving in the Armed Forces.

To find out more about the Employer Recognition Scheme and how your business can benefit from supporting the Armed Forces Community visit www.wmrfca.org/employers or www.eastmidlandsrfca.co.uk

To view the list of organisations who have signed the Armed Forces Covenant visit https://www.armedforcescovenant.gov.uk/get-involved/who-has-signed-the-covenant/