Soldiers from a Worcestershire-based Army Reserve Regiment are currently deployed in the heart of London, helping with the military response to Coronavirus.

Based out of Horse Guards Parade and Wellington Barracks, the troops from 37 Signal Regiment, whose HQ is in Redditch, are playing a key role, ensuring that communications systems for the Army in London are maintained.

The soldiers’ IT expertise provides a vital link to the military’s support on the Covid-19 frontline, including mobile testing units run by the Army on behalf of the Department of Health and Social Care.

Staff Sergeant Russell Taylor, from Redditch, deployed to London as a senior communications supervisor. He is a civil servant at HMRC and previously worked as an IT network manager.

“It’s been a privilege to be able to use my civilian skills to support this national effort.  We were able to identify IT projects where we could use our skills as reservists to help staff in the Army’s London HQ.

“We developed a range of virtual training lessons to help military and civilian colleagues become more familiar with the various software applications.

“The sessions we delivered proved incredibly popular and we soon found ourselves delivering remote training to hundreds of soldiers of all ranks, not just in the HQ, but from across the UK.”

Lance Corporal Christopher Smith, 37, from Coventry, is usually employed as a recruiter for the Army Reserves. He is based with 48 Signal Squadron in Birmingham and was one of the first members of 37 Signal Regiment to volunteer to deploy on Operation Rescript, the name of the military response to the national battle against Coronavirus. 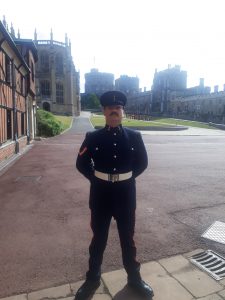 “When the opportunity to help came up, I couldn’t stand by and do nothing. I had the full support of my partner and our children and deployed to Horse Guards where I have worked as a communications operations’ coordinator.  This has been a fantastic chance to improve my skills and to show my abilities.”

Corporal Simon Hathaway from Bromsgrove works for 37 Signal Regiment and is also a part-time landscaper.  He deployed as team coordinator and said:

“When I heard that help was needed to aid the Covid-19 effort, I had to volunteer. We deployed with 48 hours’ notice and I’m incredibly proud of the work we’ve done.  London has been an amazing place to put my skills to the test and I’ve also had opportunities to deliver trade training to some of the more junior members of the team.”