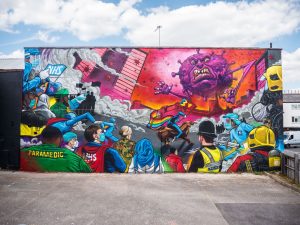 The ‘Forward in Unity’ mural is their latest project to be commissioned, focusing on a mural in the Digbeth area of the city centre to memorialise Birmingham’s response to the Covid-19 crisis.

Painted by Birmingham-based graffiti artist Gent48, the mural represents how even in these unprecedented times the city of Birmingham continues to move forward together as a city.  It depicts the city’s NHS and front line workers in their fight against the grasp of the virus, and the wider impact this has had on the social lives and economic wellbeing of the residents of Birmingham.

To mark the occasion, 250 local dignitaries and representatives of the Birmingham community have signed prints of the mural, which are available to buy, with all proceeds going to the Lord Mayor of Birmingham’s charity.  Funds are to be disseminated further to Acorns Children’s Hospice, Birmingham St Mary’s Hospice and SIFA Fireside.

Our Associations Chief Executive, Colonel Richard Maybery, was delighted to be one of the representatives invited to sign the prints on behalf of our Association and the wider Reserve Forces and cadets in the region that we support.

Colonel Maybery commented, “For many people Covid-19 has been perhaps the biggest challenge they have yet faced in their lives.  I was determined to ensure that the RFCA support to the Reserves and the cadets throughout the Covid-19 pandemic was undiminished.

“Many Reservists were mobilised throughout the pandemic to provide support, and the cadets are a fantastic youth organisation whose return to training would be of great benefit to young people in getting back to some kind of normality.

“I was delighted to give my signature in support of the Forward in Unity mural – on behalf of the West Midland RFCA.”

Paul Cadman from Art4Charity added, “The art4charity initiative came about through the passion of Birmingham’s creative community. The combination of charitable endeavour and an abundance of free time as we entered the first lockdown enabled us to pull together to create something unique and unprecedented. We collectively sought to support the City of Birmingham and its charities, who would inevitably face new challenges as the pandemic progressed.

“Our military connections have proven invaluable in guiding and publicising the project, many of whom appear as signatories on the Forward in Unity print, joined by their profiles in the accompanying book. I would like to personally thank Col. PJ Walkley, Col. David Marshall, Capt. Jay Singh-Sohal, Col. (Ret’d) Richard L Maybery, Lt Comm. Suzanne Lynch, GP Capt. Gareth Bryant, Flt Lt. David Chapman and BGen Jock Fraser for all their support in making the project what it is today.

“I’d also like to thank John Crabtree, Lord-Lieutenant of the West Midlands, and Matt Croucher GC, CEO of Pinnacle Risk Management, for their tireless efforts in establishing the initiative’s military associations.”

The next stage in the fundraising effort involves the launch of the ‘Forward in Unity’ Hardback Book, which tells the story of the project so far and profiles all 250 signatories to highlight their contribution and serve as a referential accompaniment to the signed prints.

Find out more about the Forward in Unity project and Art4Charity on their website.

Learn more about the work of our Association, and how we support the Reserve Forces and cadets in our region.