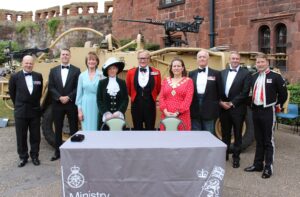 Over 80 employers and dignitaries from Shropshire attended a black tie civic reception at Shrewsbury Castle at the end of July to celebrate D Squadron the Royal Yeomanry receiving the Freedom of the Town of Shrewsbury.

Bringing together forces-friendly organisations and the military, the event was co-hosted by Shropshire Council and our Association, and sponsored by Lanyon Bowdler. It provided a chance for local organisations to experience the build up to a traditional Freedom Parade and meet other like-minded organisations. 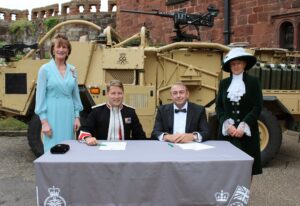 Ian McDougall, Director of WRR Pugh & Son, said: “Signing the Armed Forces Covenant is a major move for us and recognises our commitment, respect and thanks to all the people who serve or have served our country.

“We are very proud and honoured to have been invited to sign the covenant – we fully support the thinking behind it and its ongoing goals in giving practical help to those people who keep us safe by protecting us through their dedication and courage.

“It seems only right and proper that we repay this kind of commitment by making one of our own, which is why we are offering a guarantee that we are there to help them when they need it most.

“As part of our pledge, WRR Pugh & Son will be offering discounted services to serving Armed Forces personnel and their families and will be providing support with employment opportunities.

“Being part of the covenant will also help us better understand the unique situation of our service men and women and the problems they face on a day-to-day basis.”

“On the night we had three organisations sign who each made their own bespoke pledges to support the Armed Forces community. The Armed Forces Covenant in Shropshire continues to go from strength to strength.” 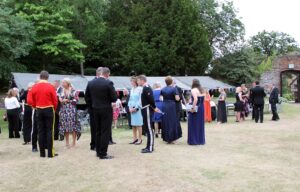 Music on the evening came from the Shrewsbury Brass Band and Cosford Military Wives Choir.

Held at the historic grounds, the castle also formed a key part of the official Freedom Parade the following day; the Commanding Officer of the Telford-based Army Reserve unit, Lieutenant Colonel Field, banged on the gate doors with a ceremonial sword to ask the Mayor of Shrewsbury to exercise the rights of Freedom.

Their Reservists paraded through the town with their bayonets fixed, ready for inspection by their Royal Honorary Colonel – HRH Princess Alexandra.

You can find out more about the Royal Yeomanry’s Freedom of the Town parade.