This summer Birmingham had the privilege of hosting  the 2022 Commonwealth Games, held in England for only the third time.

Showcasing the best of the second city and the world-class athletes and sports talent from across our Commonwealth, the ten-day event has left a lasting legacy for sport and future generations across the region.

Many individuals were nominated to carry the Queen’s baton during the official relay in recognition of their selfless actions and dedication.  Unsurprisingly some of these baton bearers came from within our Reserve Forces, Cadet Forces and wider forces networks.  Here we highlight three of the inspirational individuals who proudly carried the baton.

Running with the baton in July, Sergeant Adam Sefton carried the baton past Dudley Council House.  After meeting the Mayor of Dudley he handed over the baton to Strictly Come Dancing star, Amy Dowden.  Adam was nominated for the role by Dudley CVS and Dudley Council, recognising his work both in the community and his Army Reserve unit supporting male mental health.

He commented: “It was a very surreal feeling, I was overwhelmed at first.  However I was filled with immense pride to be representing the region, community and my regiment.

“I think the most unique feeling for me was stepping from the minibus to my start point and seeing the crowds and lots of people wanting my picture!” 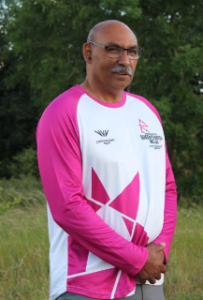 Colonel Delroy Tucker, who was recently appointed as the Commandant of Warwickshire ACF, carried the baton through Stratford-upon-Avon and finished at Shakespeare’s statue.

Delroy was nominated for the Baton Relay to commend his work with the youth and Cadet Forces in the communities of Warwickshire and West Midlands. Notably during the Pandemic, he continued his work within both the CORE Education Trust Combined Cadet Force and also the ACF.  He helped to deliver the first cadet camp in ‘bubbles’ after lockdown was lifted, and his efforts and success delivering the Duke of Edinburgh Awards was also recognised.

Reflecting on carrying the baton, Colonel Tucker said: “It was a real honour just to be nominated, so I was so  humbled to have carried the baton – the crowds were amazing, the applause was deafening!” 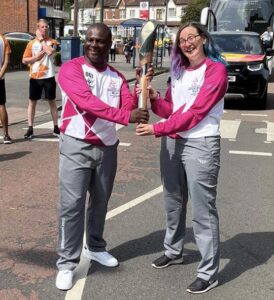 Petty Officer Edmund Grandison’s Baton Relay leg took the baton around King’s Heath in Birmingham, after he was nominated for his engagement and community work within the region.

“My route was good with families coming out on the road – the grandkids came out welcoming the Baton Relay going through their home town!” Ed shared, adding that he had his baton handover with a dancer involved in the opening and closing ceremonies at the Alexander Stadium.

Congratulations to all of the baton bearers across the Commonwealth!

Find out more about the role of the Reserves and cadets in our region.