The Junior Sea Cadets welcome youngsters to join their units from the age of 10.  Once they reach the age of 12 they then join the Sea Cadets.  Their training  as a Sea Cadet continues until they turn 18, at which point they can either leave the cadets or stay on in the capacity of a Cadet Force Adult Volunteer.

Two members of the Sea Cadet Corps who both joined at the age of 10, and are now both approaching their 18th birthdays, have shared their journeys with us so far. 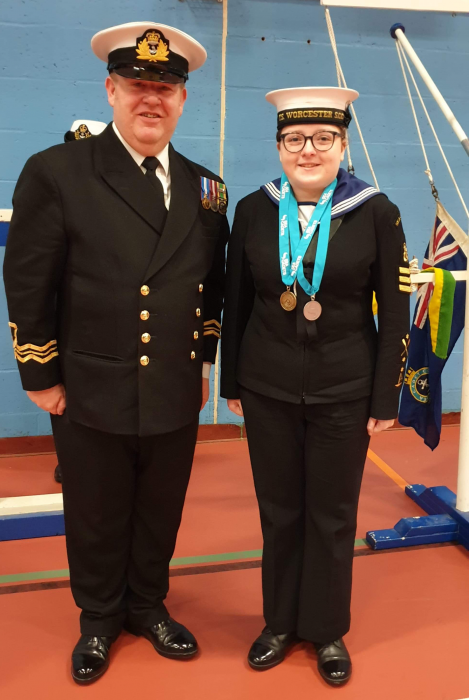 “I joined cadets because my older sister, mum and many of my family had been a part of it and I thought it would be a good way to fill up my free time and try different things.

“I really enjoy getting to know new people and travelling to new places with the cadets. I have been offered many opportunities that I wouldn’t get anywhere else.

“Being a Sea Cadet has helped me gain many skills and qualifications, including engineering, windsurfing, first aid and power boating.  I’ve developed my team work skills and I know how to be an effective leader.

“My highest achievements include attaining my Petty Officer Cadet rate and being the best squad commander at my last district drill competition.  My favourite experiences have been travelling to all the National Sea Cadet Training, which includes HMS Excellent in Portsmouth for the National Trafalgar Day training and parade which took place on Horse Guards Parade in London!

“Next in my Sea Cadet journey is transitioning to a uniformed instructor when I turn 18, to pass on my knowledge and experience to other cadets.

“In all I owe a lot to the people I’ve met through cadets and all the adult volunteers that have helped me along in one way or another – it’s been an exciting 7 years.” 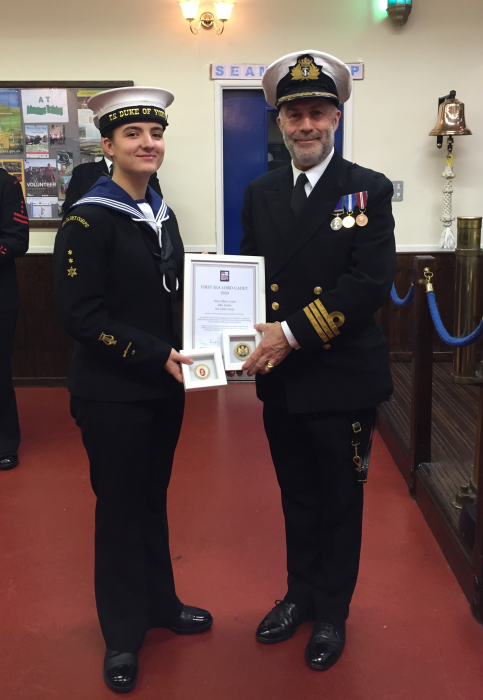 “I joined the Corps as a 10-year-old Junior Sea Cadet in 2013 when I was invited by a friend to their open evening.

“Parade nights quickly became a part of my weekly schedule and have been an integral part of my life for the past 7 years, with many of my weekends being spent away on courses and at competitions, as well summer camps and training weeks.

“As a cadet I have been able to develop skills and gain qualifications which I didn’t know were available to people of my age such as Cadet Rowing Instructor, Intermediate Marine Engineering and Advanced Catering.  More importantly, I have developed friendships with people from all around the country which I know will last a lifetime.

“I have also had numerous opportunities in the last year to represent the Sea Cadets at National level.  In October 2019, I was part of the South West Area Platoon at the National Trafalgar Day commemoration on Horse Guards Parade in London and had the opportunity to march down the Mall towards Buckingham Palace, and in November I travelled to Weymouth to attend the National Cadet Conference, where we discussed the future of the Corps, engaged in team activities and met members of the Sea Cadet Alumni.

“In January of this year I was invested as South West Area’s First Sea Lord’s Cadet for 2020 on board HMS Victory in Portsmouth.  I am one of 6 cadets from across the country who represent the Sea Cadet Corps at Naval Ceremonies, National Events and Royal Engagements throughout the year, whilst also being an ambassador for the charity and chairing cadet forums encompassing the cadet voice and future of our organisation.

“As part of First Sea Lord’s Cadet duties, in March I attended the Royal Marines Band Service Mountbatten Festival of Music at the Royal Albert Hall where we were tasked with escorting VIPs to their boxes and had the chance to perform a carpet guard for HRH Duke and Duchess of Sussex.  This is one of my most memorable achievements in my life so far and I will be forever grateful to the Sea Cadet Corps and the Adult Volunteers from my local unit for allowing me these opportunities.

“At the end of this year I will be turning 18 so my time as a Sea Cadet will sadly be coming to an end, but I will definitely be staying at Malvern Unit as an Adult Volunteer to give back to an organisation which means so much to me and to ensure that cadets of the future can have a Sea Cadet experience as memorable as mine.

“Being part of a Cadet Organisation means being part of a journey and sharing it with people who were once strangers, but now your closest friends.  On this journey you pick up new skills and qualifications which help you to develop as a person.  All it takes is commitment, perseverance and loyalty.”