The Armed Forces Covenant was introduced by the Ministry of Defence in 2014 and is used across the country for businesses to pledge their support to the Armed Forces family. The organisations who hold a Covenant recognise the value serving personnel, both Regular and Reserve, veterans and military families contribute to their business and our country. 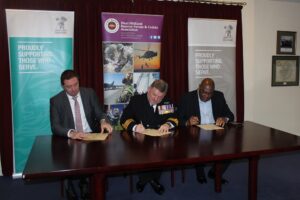 The City of Birmingham Rockets Basketball Club was founded in 2003 by the Chief Executive Officer, Robert Palmer. The club has a substantial community programme that engages between 800-1,000 young people each week, a performance programme consisting of 16 teams, including men’s, women’s and youth teams, competing nationally; and an educational academy programme which provides elite level basketball in partnership with academic delivery. The club competes in games with teams from across the country and are based at their home court at the Nechells Wellbeing Centre in Birmingham.

Robert Palmer, Chief Executive Officer of City of Birmingham Rockets commented, “We are extremely proud to be the 1000th West Midlands Armed Forces Covenant signee. This is an extremely special moment for our organisation.

“Here at City of Birmingham Rockets, we work with over 1,500 young people each week from the diverse backgrounds and communities of Birmingham.

“We utilise our consistent core values of integrity, respect and commitment, which we believe align closely with those of the Armed Forces, to create a positive, equitable and disciplined environment. We teach leadership, independent thinking and use team work to help our young people realise their full potential by working together.

“My own father served as a Royal Marine, and with a serving soldier and marine currently representing the club in our first teams, I am very aware of the significant sacrifices that Armed Forces personnel and their families make in carrying out their services and duties.

“The incredible work carried out by the Armed Forces on a daily basis is often unseen but vitally important in protecting us all. As part of our pledge on signing the covenant, we commit to being Armed Forces friendly and will ensure that no member of the Armed Forces shall face any disadvantages compared to any other citizen when accessing our services.  We are committed to supporting military personnel, their families and Reservists.

“We now look forward to working closely with the Armed Forces, and in particular will be proud to promote the fact that we are an Armed Forces friendly organisation.” 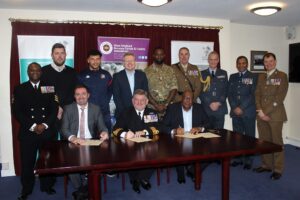 Colonel (Ret’d) Richard Maybery, Chief Executive of West Midland RFCA added, “We are delighted to welcome the signing the Armed Forces Covenant by representatives from the City of Birmingham Rockets Basketball Club. The Rockets and the Armed Forces have much in common, not least their values and standards, the developmental opportunities they open up to young (and not so young) people, and their desire to engage with and reflect the community. Today is particularly sweet, as it is the 1000th signing of the Armed Forces Covenant, in the West Midlands – the 1000 signatories include employees, community groups, and other organisations, over the years. I can think of no better organisation with which to mark this truly momentous event today, and I am delighted that it is the Rockets who are our 1000th signatory. They are a great example of what an Armed Forces friendly and supportive organisation should be and we look forward to continuing to build on our relationship with them.”

Companies are continuing to deliver on their pledges of support towards the Armed Forces community. This can be seen in the number of organisations recognised by Defence through the Employer Recognition Scheme. Within our region, there are currently 123 employers who hold a Silver Award and 49 employers who hold the Gold Award.

The type of pledges made vary from endeavouring to work with defence-funded recruitment agencies, supporting existing staff to become Reservists or Cadet Force Adult Volunteers and promoting the fact the organisation is Forces Friendly. Whether you are a small or large organisation there is a way you can support the Armed Forces family and the Armed Forces can support you.

On behalf of the West Midland RFCA, a sincere thank you to all of the organisations who have now signed the Armed Forces Covenant within our region. If you are yet to sign and would like to find out more please contact the West Midland RFCA Employer Engagement Team on wm-ee@rfca.mod.uk.

Find out more about the work we do with employers.